A spirit that can’t be broken, even after a typhoon 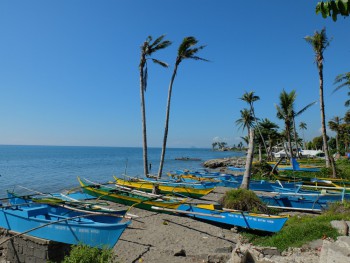 It’s been nine months since Typhoon Haiyan (known locally as Yolanda) barrelled through the Philippines, yet evidence of its gale force winds and crushing waves are still very visible all around the city of Tacloban, one of the worst-hit areas. Although debris has been cleared from the roads, at times it feels as if it has simply been pushed to the side. Gnarled metal reaches out towards the sky, surrounded by collapsed walls. Nearly every structure has some part of it that is bent, shattered, twisted or simply missing.

Even more overwhelming, however, are all the tents and small patchwork houses that line the sides of the roads. These, unlike the hollow shells of other buildings, have lives inside, families who have to make these makeshift shelters into homes. The possibility of any permanent housing still seems far off.

This is the case of Barangay 89. A barangay in the Philippines is a municipal subdivision, much like a neighbourhood or borough. To a certain extent, each barangay here must fend for itself if it wants to receive services such as transitional shelters, new tarpaulins, access to government land to rebuild, etc.

Barangay 89 is a coastal community, where most of the citizens saw their homes washed away by the 20-foot waves of the storm surge that engulfed the land in this area. Today, the barangay is a concoction of tents made of weather-beaten plastic tarps and scraps of metal and wood collected from the debris. Thankfully, the community is not alone. Development and Peace’s local partner Urban Poor Associates (UPA) is helping the community understand its rights and petition the government for services. It has also facilitated the creation of the Yolanda Survivors’ Women’s Association to help the women in the community meet their needs. The women have started a community garden, which is helping many to feed their families. While visiting the garden, I met Jobert 4, whose father died in the typhoon. He is blind and his mother is having difficulty providing for her family. Jobert clung to a harvest of yams his mother collected from the garden when the oppressive heat of the sun subsided.

The strength of spirit of Barangay 89 was felt in full force at a special outdoor mass concelebrated by Most Rev. Michael Miller of the Archdiocese of Vancouver and Most Rev. Jean-Louis Plouffe of the Diocese of Sault Ste. Marie. Both bishops are part of the delegation visiting Development and Peace projects in response to Typhoon Haiyan. During the offertory, members of the community brought forward vegetables fresh from their gardens, small crabs captured out of the nearby sea, as well as a basket overflowing with white papers with the names of loved who lost their lives during the typhoon. After the names of the deceased were blessed, the papers were burned and the ashes cast into the sea that took them.

After a theatrical performance by a youth group trained by Development and Peace partner, the Philippine Educational Theatre Association, that mixed humour and drama to express the youth’s experience of Haiyan, it became clear that the community, by working together and supporting one another, is slowly coming to terms with the raw emotional scars of Haiyan, even while still surrounded by a landscape of physical wounds.

As Archbishop Miller said to the large crowd at the end of what the community itself called a celebration: “The human spirit has risen above all the tears, sadness and death to be able to celebrate and rejoice. That is a great sign of your resilience and your faith”.