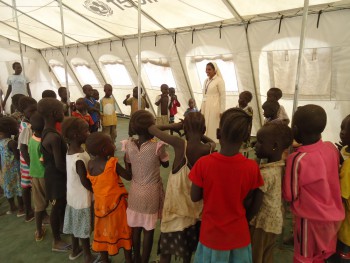 It should be a day of celebration in South Sudan today. July 9th marks the third anniversary of the country’s hard-fought independence. Instead, the population lives amidst conflict and terror, the threat of hunger and disease looming large. The country was recently named the most fragile state in the world by the Fund for Peace, claiming the title which was previously held by Somalia.

Since achieving independence, South Sudan has been unable to consolidate peace and shake the culture of violence that took hold during the nearly fifty years that rebels groups fought with the Government of Sudan for a sovereign nation. In December 2013, the country descended into civil war, causing the displacement of over one million people within the country, and forcing 400,000 to become refugees in neighbouring countries.

With clashes intensifying, the suffering of the population continues to rise. There are currently 3.5 million people who are at risk of famine, and cholera is spreading quickly. Many of the displaced are living in makeshift camps with few resources. These tenuous living quarters have been made all the worse by the rainy season which has created muddy terrain and poor hygienic conditions.

In June, Development and Peace launched an appeal to provide relief for this growing humanitarian crisis. It is working with Caritas South Sudan and the Society of Daughters of Mary Immaculate (DMI), who are both courageously providing aid despite living in insecurity and facing substantial challenges.

"Every day, it's a puzzle to get our 24 sisters to their place of destination. The roads are very bad and in the capital Juba, there are daily traffic jams. Plus, you get to deal with roadblocks. We were recently arrested by soldiers and had to sit down on the side of the road. There were some worrisome moments, but fortunately, they let us go unharmed,” explains Sister Amela Francis. The sisters are working in the United Nations Tomping Civilian Protection Site, providing medical aid and therapeutic services.

“The dedication of our partners to help the most vulnerable is truly inspiring,” says Dominique Godbout, Emergency Programs Officer at Development and Peace. “We are privileged to work with such committed individuals, who are daily on the frontlines to bring care and comfort to those who have lost everything. Their actions should inspire all Canadians to take action as well.”

The sisters show no signs of abandoning their work anytime soon, determined to help the country find peace as a nation through its own people.

"We want to reduce the suffering of war victims," says Sister Amela. "Every refugee has to live with his own gruesome history, many suffer from post-traumatic stress syndrome. We focus on the much needed relief for the most vulnerable in the camps: women, children, the elderly, the sick and wounded. Physical and mental wounds must heal."

Contribute to Development and Peace’s work in South Sudan today!