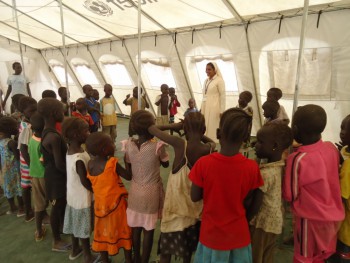 Since becoming its own nation in 2011, South Sudan has struggled to establish a society of peace and democracy. Lingering tensions that exist between various armed political and ethnic groups, which pre-date the creation of the country, were re-ignited in December 2013, when clashes erupted in the capital Juba. Since then, violence has spread to other parts of the country.

There have been disconcerting reports of mass killings, arbitrary detentions, enforced disappearances, sexual violence, widespread destruction of property and the use of children in the conflict. There are also claims that violations of international humanitarian laws have taken place.

This has led to the displacement of 750,000 people within the country and 130,000 who have fled into the neighboring countries of Uganda, Kenya, Ethiopia and Sudan. It has also put 7.2 million people at risk of becoming in need of humanitarian assistance in the coming months, both in areas directly struck by the violence and in the country as a whole. Currently, there are over 3 million people estimated to be experiencing severe food shortages, of which more than 90% are located in states that are most affected by the crisis.

Development and Peace, which has a long history of working in Sudan and provided support to local organizations to promote peace and tolerance during the transition of South Sudan to its own country, is working with the Society of Daughters of Mary Immaculate (DMI) to support 500 families who are currently taking refuge in the Tomping camp in Juba. The Church is critical for providing humanitarian aid in South Sudan, as it is one of the few actors that has the ability to carry out this type of aid in the country.

The conditions in the camp are despairing, with a lack of sanitation and overcrowding causing the spread of diseases such as malaria, diarrhea and measles, and malnutrition.

The DMI with support from Development and Peace is helping to prevent the spread of diseases and malnutrition by distributing safe drinking water and providing nutritious snacks to children. It has also set up a medical clinic in the camp four days per week to treat 150 vulnerable people, mostly children and the elderly.

The Sisters are also providing psychosocial support and trauma counseling to help those affected cope with the traumas they experienced, , especially children. They are organizing sport events with the children to create spaces for them to come together and share their feelings, providing individual counseling to victims of the war and holding peacebuilding workshops with community leaders to prepare them for peaceful coexistence with other ethnic community when they move out from the camp.

Development and Peace is continuing to monitor the situation in South Sudan and will increase its support based on the assessments of its local partners.