Solidarity has no borders

In Emergencies, Fundraising
April 7, 2015
by
by Janelle Delorme, Regional Animator for Manitoba 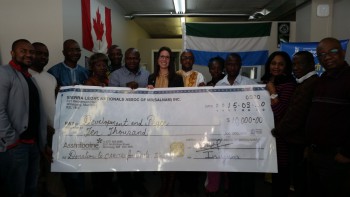 The first time I heard about Sierra Leone, I was 14 or 15. I read an article about child soldiers who were fighting in the civil war. From the pictures I saw - children with guns, drugged and dismembered - it certainly did not appear “civil.” My heart broke. I couldn’t stay silent about this injustice so I wrote a paper for a high school project. At the time, the civil war in Sierra Leone was not on many people’s radar and the international community only started to talk about blood diamonds years later.

Fast forward many years to a just few months ago, when in December 2014, I received a phone call from a soft-spoken man named Allieu Sesay told me that he’s the president of the Sierra Leone Nationals Association of Manitoba (SALNAM) and he would like to invite me to present to their Ebola Campaign Committee on the work of Development and Peace. The committee were particularly interested in knowing how Development and Peace was supporting Caritas Sierra Leone in responding to the Ebola crisis. Needless to say, I met with the SALNAM Ebola Campaign Committee, chaired by Dr. Ismail Yumkella, in January 2015. And thus began a wonderful relationship with this group whose goal was simply to do what they could to help their community back home.

On March 20th, we gathered at the SALNAM Resource Centre for an important event. After much anticipation, SALNAM presented a $10,000 cheque to Development and Peace. Though we gathered to recognize the amazing efforts of the community in raising these funds, we also gathered to remember those who have passed and those who have been left behind. Simeon Ganda shared his poem with us.

I stand and stare with longing eyes
To be a part of that bustling band;
But 'lo my kind is not allowed
Lest I spread that which they fear;
For I'm an Orphan of Ebola

My Father died and so seemed hope;
Hope of ever a graduate be;
My Mother too with love she died;
I stand dejected, rejected and neglected;
One more Orphan of Ebola

Where my Father's sister shut her door;
My Mother's brother cast me out;
Will I per chance oh love discern;
Or tears of sorrow cease to flow?
I, an Orphan of Ebola

That dreaded virus its name to call I shiver;
Its wrath shall ever in my mind be;
It passed through my land; my village and home,
Seemingly Killing hopes, desires and dreams
Leaving us - Orphans of Ebola.

Alas we cry our eyes to the sky;
Who shall feed, clothe and shelter us
Our humble pleas and pregnant sighs;
On whose sympathetic ears may fall?
To help us - Orphans of Ebola

Behold I rise and boldly proclaim;
Our hopes and dreams they slumbered instead;
Your wrath filled venom shall never kill
Our forebears' spirits bred in us;
For once there's life, there ever shall be
Hope for Orphans of Ebola.

Sierra Leone will always have a place in my heart, whether it is the face of a child soldier or an orphan child. What this community has shown me is that solidarity has no borders, no gender, no ethnicity, no religion. We are all one human family and we can all make a difference to help our sisters and brothers who need us the most.