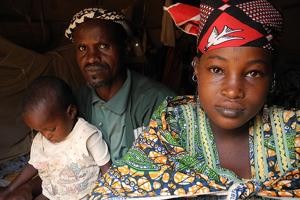 Since this past January, over 200,000 people have fled their homes in Mali, mainly due to rebel offenses in the north of the country. Of this number, 107,000 have taken refuge in other parts of the country, while the rest have fled to neighbouring Mauritania, Niger, Burkina Faso and Algeria.

In the capital of Bamako, the situation is calm, but the population is suffering from a complete embargo imposed by other countries in the region, which are demanding that the military junta that seized power in coup d’état on March 21st, relinquish its position and allow the return of constitutional order.

Since the coup d’état, the situation has seriously deteriorated in the country. There are four rebel groups that are fighting over control of the northern part of the country: the National Movement for the Liberation of the Azawad (MLNA), a separatist rebel group wanting an independent state in northern Mali; al-Qaida in the Islamic Maghreb(AQMI); Ansar Dine (the army of AQMI), which has announced its desire to introduce Sharia law in the country; and the Movement for Unity and Jihad in West Africa (MUJAO), a new Islamist group. The crisis was set off by the return of heavily armed ex-military combatants who had gone to fight in Libya for Muammar el-Qaddafi.

Deep tensions exist between these groups and the conflict is beginning to target religious communities. “Saturday night, we managed to escape the city of Gao after learning that certain Islamist rebel groups were searching to kill priests and other members of religious orders. Saturday afternoon, the rebels were temporarily pushed back out of the city, but after regrouping they seized Gao once the army had abandoned the city. We were warned that morning by our guard that our church and centre were destroyed. We also received calls from Christians in Gao who said they were in hiding and in fear for their lives. Approximately 200 Christians are still in the city,” said Father Jean-Jacques, Director of Caritas Gao, in a Caritas Internationalis press release.

Sharia law has already begun to appear in Timbuktu, where accused thieves were immediately killed without any formal trial.

Equally worrisome, is that all this is happening within a context where 12 million people are in danger of not having enough food in the Sahel region, which includes Mali. In Mali itself, 3,575,160 out of a population of 16 million are affected by this food crisis.

In his Easter message, Cardinal Oscar Rodriguez Maradiaga, who is the President of Caritas Internationalis, reminds us of the following:

“The hunger spreading across Chad, Niger, Mali, Burkina Faso, Senegal, Gambia, and Mauritania is due in part because of drought and pest. The crisis has manmade causes too: our global system of food favours multinational corporations and weakens the small farmer. The truth is that we have known about the looming food crisis in West Africa for many months. Pope Benedict warned in February, ‘The Sahel is seriously threatened again in recent months by a notable decrease in food resources.' Caritas staff members and the people we help have been ringing the alarm bells, with some communities saying that they have never known the situation to be as bad as this. Caritas has launched emergency appeals to provide food and other aid to over 650,000 people. But the international community has not acted. Those Sahel countries still have less than 50 percent of the aid they need. We know that by acting early and quickly we can save both human suffering and money. Niger has experienced food emergencies before, recently in 2005 and in 2010. The cost of averting a hunger crisis in Niger in 2005 was put at $7 per person. The world failed to act. The cost of responding once the crisis was full blown came to $23 per person.”

On February 24th, Development and Peace launched an appeal and is encouraging Canadians to contribute towards providing help for this worsening humanitarian crisis.