Seeing firsthand the effects of mining in Peru 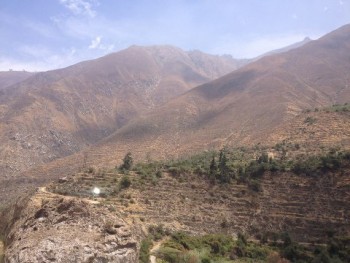 The road from Lima to Huancayo, in the central Highlands of Peru, is a dusty and graffiti-streaked highway that climbs, at first slowly, out of a grey, mist-shrouded Lima. It is flanked by settlements of poor neighbourhoods, where pastel-coloured ramshackle houses are precariously perched on the mountainside, looking down on to a four-lane highway.

A couple of hours out of Lima, the scenery becomes greener. There are “eco-hotels” and family recreational areas along the roadside, and for the first time in four days in Peru, I see the sun peeping out from behind clouds. Men wash cars by the roadside, children play and an abundance of scruffy-looking dogs trot around looking for food.

The higher we go, the more the vegetation changes to a kind of tundra, as tunnels cut through the mountain and the number of hairpin bends increases. As the landscape becomes increasingly bleak, it also becomes increasingly dominated by the activities of mining companies. The further one gets into the Central Highlands of Peru, the more one sees of mining. Plaques of Peruvian mines, financed with small amounts of capital from Panama or Brazil, line the road, and the terraced areas built by the mines become visible. And the higher we go, the more evidence we see of pollution. Shrinking lakes - that were once pristine blue drinking water supplies – are now polluted and have become an ominous greyish-black colour. We see swirling clouds of dust produced by mining activity.

The bus then descends maybe 500 or 600 metres to the city of La Oroya, one of the most polluted in the world. Here, US-company Doe Run has its polymetallic smelter, whose belching filth has literally poisoned the bloodstreams of the local inhabitants. Local Archbishop Pedro Jimeno Barreto, who works with our partner CEAS, has made it a priority to fight for the rights of the local population to live in a cleaner environment. He recently testified to the US Congress in an attempt to stop Doe Run from re-launching its operations, which were suspended due to local concerns regarding pollution.

Archbishop Barreto has had to endure a series of increasingly aggressive anonymous death threats ever since. Doe Run and its employees have made it clear that those who question their operations are not welcome in La Oroya: “No to anti-mining NGOs: Out of La Oroya”, “Doe Run is not contaminating the Mantaro River” and “We want to work” are just some of the slogans crudely painted on the smelter’s walls.

But for the people of La Oroya, who wonder about the long-term health effects of concentrations of lead, arsenic and cadmium in their blood, Archbishop Barreto is a brave man. Archbishop Barreto will now be able to raise his voice for this population in Rome, as he has just been nominated by the Vatican to the Pontifical Commission for Justice and Peace.