Securing homes for the homeless after Typhoon Haiyan

In Emergencies, Field visits, Members in action, News from our partners
July 15, 2014
by
Jesslyn Dalton 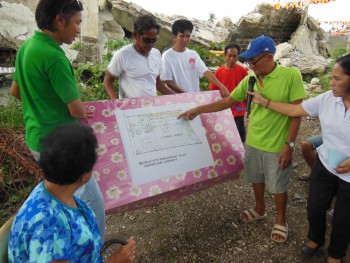 We left our hotel in Tacloban to catch a 6 a.m. flight to Manila. Unfortunately, when we arrived we found that the Tacloban airport had been shut down for two days so that the tarmac, damaged by Typhoon Yolanda (Haiyan), could undergo repairs. So Instead of having a short flight and then our visits in Manila to the Canadian embassy and to the headquarters of NASSA-Caritas Philippines – we spent a whole day just getting to Manila. Our alternate route took us by land to Ormoc, two hours south of Tacloban, by water (a 3-hour ferry ride) to Cebu followed by a long wait in the Cebu airport before we could fly to Manila, arriving at our hotel at 11:30 pm.

On our way out of Tacloban, we stopped at the cathedral of the Archdiocese of Palo. The building was extensively damaged by Yolanda but now appears to be fully repaired. We were told that Pope Francis will visit Tacloban in January and will celebrate mass at this church. The Vatican confirmed these plans just yesterday. The press release stated that Francis wants his visit “to be simple and pastoral. He wants to meet people who have suffered.”

What really impressed me as we drove out of this city that suffered the most from Yolanda’s winds and waves, was the optimism of the people. They are carrying on as best they can with their usual work and school routines even though there is still so much to do to recover. Many of these people are still living in tents because of a local government order creating no-build zones and because landowners refuse to allow victims to erect houses on their land. Development and Peace partner Urban Poor Associates (UPA) is helping groups of homeless to advocate for their right to housing and to identify and negotiate with landowners who might allow groups to rent from them.

Yesterday, part of our group visited a three-quarter-hectare plot of land sandwiched between a building that withstood Yolanda and another that had crumbled in a heap of concrete. UPA, working with eleven families, has obtained permission from the landowner, for the families to rent the land for at least two years. An area sketch shows where their houses will stand, where the basketball court will go, where a small pond will be dug and where community gardens will be grown. The families were all present at a ceremony to thank Development and Peace and to formally announce the turnover of the land. They have decided to call the plot “Wonderland.”