Redefining living together at the heart of Cambodia

In Field visits
July 31, 2017
by
Alice Gaudreau, intern with the QSF group in Cambodia 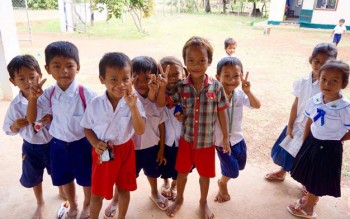 Eight young people from Quebec are currently completing an introduction to international solidarity internship in Cambodia as part of the Québec sans frontières (Quebec without borders, or QSF) program. They are supporting a Development and Peace partner, Development and Partnership in Action (DPA).

DPA is partnering with, empowering, and supporting the poorest and most vulnerable Cambodians, particularly in rural areas. It actively contributes to the creation of an environment conducive to sustainable and equitable development. As part of its partnership program, DPA provides support to grassroots community organizations, such as the Por Samrong agricultural cooperative, where the QSF internship is taking place.

The group is sharing their experiences with us during their stay. Here, Alice talks about particular moments during her first weekend in the village.

It was our first Sunday in the community. Everything was still to be discovered, and we knew nothing about real Cambodian culture, except for the general information that we had been able to find online.

We sat down and waited to see what would happen. After a while, neighbors began to arrive by bicycle, holding the handlebars with one hand and their toddlers with the other, as if our visit were the commonest thing under the sun. They gathered at the place where we were staying, ensconced comfortably in a squat position, the preferred way of sitting in our community.

The children played together and the women watched them, chatting and applauding their accomplishments. I was struck by the fact that all the eyes were on the children, watching them play as if they were the centre of the universe. One of the children is called Cheeataa. She is the great-granddaughter of our host mother. On the day in question, we couldn’t even tell which of the women was her mother. They all behaved as if every child belonged to them. The children were tossed from woman to woman without ever whining, because every woman on hand was their mother to a certain extent.

This moment, so commonplace to them, was particularly striking to me. I am an only child from Quebec. I was mostly brought up by my mother, and her eyes followed me around, not those of the neighbors or my cousins, ​​as is the case for Cheeataa, in Cambodia. As you are well aware, in Quebec the various members of an extended family rarely live in the same place. We live in different neighborhoods and in different cities, and even though we see one another less often, we can always comfort ourselves by thinking about Christmas Eve, when we all get together.

These questions do not arise in Cambodia. My fascination with the everyday scene unfolding before my eyes speaks volumes about our relationship with others and with the community. In Sre Samrong, everyone knows each other. My host mother greets every person she meets, something that would be unthinkable at home. Why are we so disconnected from each other in Quebec? So we don’t know everyone around us, but what really stops us from trying to know them? I can’t find a satisfactory answer to this question.

I was thinking about all these things, when suddenly I felt good, sitting there on the floor in the house. As I listened to Cheeataa riding her mini-tricycle, I let my eyes wander from face to face, delving into the eyes full of joy and love of the women around me. The aura of simplicity that surrounded this little community made me want to become an integral part of it as well.

We all know the proverb "it takes a village to raise a child," but do we really understand it? The women of Sre Samrong certainly do. They know that they can count on each other. This belief is so deeply held by them that they never question its implications. For them, it is only natural that someone else – even a stranger like our colleague intern Berry – would take their child from their arms as if the child were his.

We are the ones who have created this clear boundary between what belongs to us and what doesn’t. In Quebec, the distinction is much greater and reinforces our separateness from others. In Cambodia, the line is more fluid, and this fluidity gives strength to their community and their community movements, like the PSR agricultural cooperative with which we collaborate.