Reconstruction after Hurricane Matthew makes progress thanks to local participation 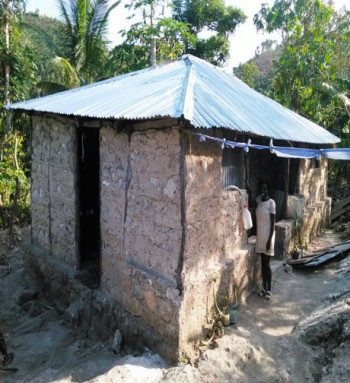 Once a charred brown, the palm lined hills that surround the colonial town of Cavaillon, have, two years after Hurricane Matthew, regained their verdant allure. This town of 44,000, divided into five rural sections on the plains of Haiti’s south coast, is probably best known as the birthplace of Silvio Cator, Haiti’s only Olympic medallist who won a silver medal for long jump at Amsterdam in 1928.

Today, Cavaillon is on the road to recovery from the powerful category 4 hurricane that barrelled into the community on October 3rd, 2016, killing 27, destroying 1,291 houses, and wiping out more than 30% of trees and crops.  Development and Peace supported an innovative house reconstruction project that put local Haitian grassroots organizations at the centre of a process of taking back control of their own community development.

At a November meeting in Bercy, a rural section of Cavaillon, members of the Coordination des Organisations pour le Changement à Cavaillon (COCC), who worked with Development and Peace partner ITECA (Institute of Technology and Animation) to carry out the post-Matthew program, all agreed on one thing:  it was not easy.

In fact, rebuilding just a handful of destroyed homes in a remote rural area proved to be such a challenge that the experience offers important insight into why so many aid projects in Haiti fail.

COCC leader Pierre Antoinier St. Cyr recalls the difficulties transporting building materials to rural areas only accessible by dirt roads resembling river beds, sudden hikes in building material prices, the challenges of training local masons in the basics of construction work, the struggle of beneficiaries to somehow find the funds to pay their contribution, to name just a few of the obstacles.  And, after the project launched in early 2017, the Haitian government suddenly introduced a new requirement for all NGOs working in post-disaster reconstruction to first submit building plans to the government – a rule that held up the project by several weeks.

“We learned a lot from the disaster relief efforts after the 2010 earthquake,” says Chenet Jean-Baptiste, director of ITECA.  Only 3% of the $776 million USD spent on earthquake relief was channelled through the Haitian state, with little or no consultation with Haitians. “The relief efforts left Haitian organizations and the state weakened and encouraged people to passively wait on handouts and relief operations. Matthew was an opportunity to do things differently,” says Jean-Baptiste.

With ITECA, Development and Peace made sure that part of its Hurricane Matthew reconstruction program was aimed at strengthening grassroots Haitian organizations, and to reinforce the autonomy and dignity of project participants by ensuring their active implication in post-disaster efforts, rather than just being passive beneficiaries on the receiving end of aid.

“At first, we planned to repair 100 houses, in 3 rural sections,” said Pierre Antoinier St. Cyr, who is also a member of Tet Kole, a grassroots farmer organization that is a member of the COCC.  “We went to visit to see what was possible to repair – and we saw that none of the flimsy houses could be repaired, but we would have to rebuild.”

But there were not enough funds to rebuild the houses of the some 2,000 families left homeless by Matthew. The member organizations of COCC sat down, with support from ITECA, and drew up a list of priority criteria for the selection of affected households.  These included households headed by women, and vulnerable families that elderly members, or several children.  It was also decided that each selected household would have to be responsible for pre-construction excavation and would have to provide building materials, including sand, gravel and stones worth $2,650 – around 30% of the $9,000 cost of each house.

“We went to the 2nd, 3rd and 4th sections to discuss with victims, and then we went to the fifth section, where everything had been flattened by the hurricane.  When we discussed the contribution people would have to make, the number of houses went from 50 to 30, then to 25, when we saw that people couldn’t contribute what we initially thought.”

The mandatory contribution was not easy for many of the participants.  Many had to borrow money.

“People had to make a contribution in order to have their own home.  Beneficiaries aren’t necessarily the poorest of the poor, but neither are they rich,” says Antoinier St. Cyr.

Many of them haven’t yet managed to finish their houses, some still have no windows, or doors.   And inevitably, the beneficiaries found themselves the target of resentment and envy from some neighbours.

“Today people are proud of their houses and the sacrifice they made, in order to build them.  It was a process that respected their dignity,” says Noe Lacombe, president of the COCC.

The mandatory contribution was not the only problem encountered by the COCC in the reconstruction process.  Purchasing, storing and transporting the cement blocks and wooden materials to rural areas was a logistical challenge, as was training the local building site workers.

After purchasing the cement blocks in Les Cayes, the capital of the department, the materials were transported to a warehouse in Cavaillon, which was the responsibility of the COCC.  The Committee appealed to the mayor and his two deputies for help with storage, but they were not forthcoming.

“We asked the mayors to work with us, but only one of them would.  The other two spoke badly of us and started to spread rumours,” recalls St. Cyr.

“Then we started to receive threats – and a spate of people came by, offering us money for the building materials, trying to corrupt us.”

They held firm.  By the time it came to transport the first lot of corrugated iron roofs to the rural sections of Trois Mangos and Bercy, they had to ask the cityhall to provide security, for fear the precious materials would be stolen.

Local work forces were used in order to ensure maximum economic benefits to the community.  But the local masons were sometimes not punctual.  And some project beneficiaries failed to prepare their lots on time or did not always contribute the materials they were supposed to on time, often holding up construction.  And there were endless delays as materials were in short supply, prices rose with inflation, or heavy rains rendered the dirt roads impassable for trucks transporting materials.

At the end of the process, 25 poor families have new, solid houses with a lounge/dining area, two bedrooms and an outdoor veranda.  They have been wired for electricity, are seismic proof and will withstand any hurricane.

And the COCC and its members have shot up in the esteem of the population.  It has not escaped people that no other organization has actually delivered on its post-Matthew promises in these isolated rural areas.  In the weeks following Matthew, the presidential Caravane de Changement of public works vehicles promised to help people rebuild, but then disappeared.  And people still wonder how the local authorities used 300,000 gourdes ($6,000) and 6,000 sheets of corrugated iron that was sent by the central government for reconstruction.

“We were not able to help everybody,” says Noe Lacombe.  “It was sometimes quite a dilemma.  But now 25 families have solid homes that can serve as shelters for larger groups during bad weather.  And the community spirit among participants is also stronger.”

In addition to this project in Cavaillon, which included supplies to relaunch 300 vegetable gardens, Development and Peace also worked with ITECA to provide important repairs to 100 houses in Grande Anse. It also partnered with the Fondation Julia et Jade to rebuild 50 family homes and a school, contributed $250,000 to Caritas Haiti for house repairs in the diocese of Jeremie, and helped its partner OFTAG rebuild its office, which is an important meeting centre for women peasants. 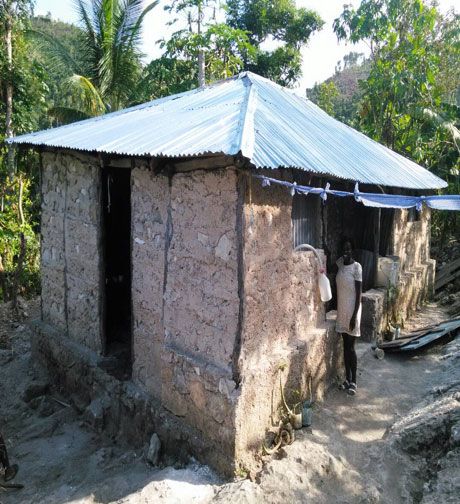 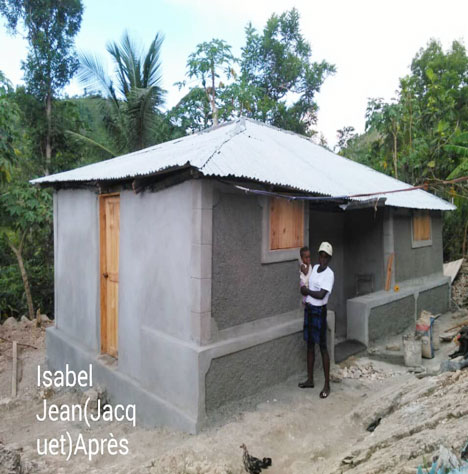 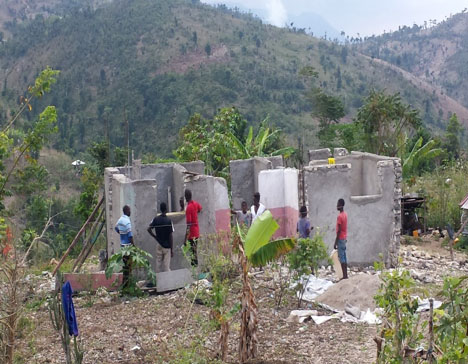 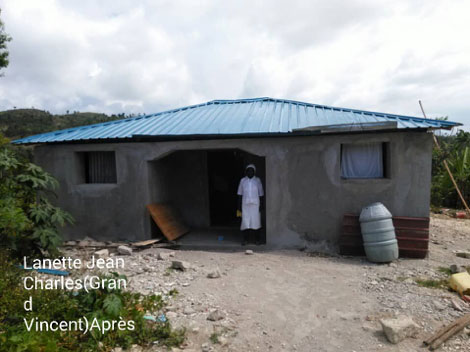 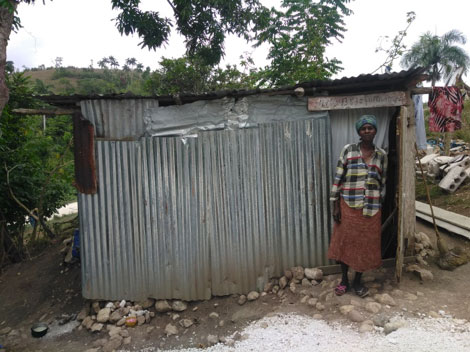 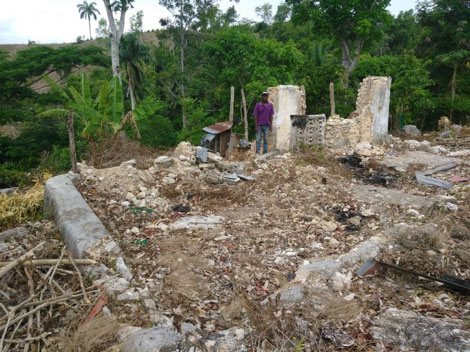 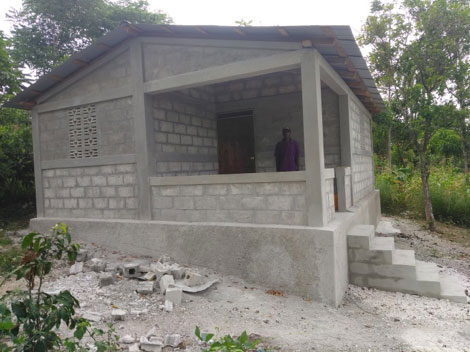