Rebuilding a community one house at a time

In Emergencies, Field visits, Members in action, News from our partners, Solidarity trips
July 10, 2014
by
Maureen Sonntag, Member of Development and Peace 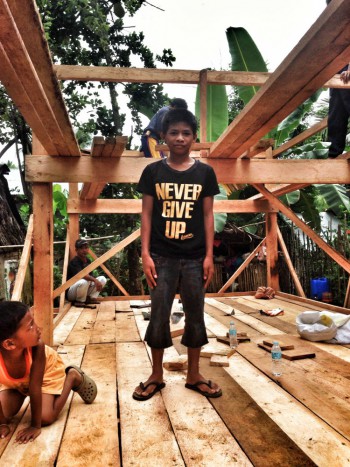 Today, we travelled to Caisawan in the province of Eastern Samar to actively participate in the Typhoon Haiyan (known locally as Yolanda) Shelter Recovery Program. The money for this program has come from Canadians who donated to Development and Peace’s emergency appeal to help those who experienced the devastating impacts of Typhoon Haiyan, which hit the central part of the Philippines on November 8, 2013.

Development and Peace raised almost $12 million to support relief and reconstruction efforts for those most affected by this storm. In addition, Development and Peace received $2 million from the Canadian government for a housing project that we had the opportunity to see today. This project is being done in collaboration with Catholic Relief Services (CRS). Julian, an engineer with CRS, explained that their workers have been met with hope, resiliency, as well as a strong sense of partnership and cooperation, by the members of this community. He stated that at the end of the project there will be 7,000 families whose housing will either have been improved or completely replaced. In this Barangay (municipality), there are 51 homes that have been slated to be totally rebuilt. Five of these homes, which measure 24 square metres each, are nearing completion.

Our delegation was fortunate to lend a hand in the partial construction of one of these homes today – more in a symbolic way than anything. In the middle of the day, we were privileged to witness and participate in a Bodol celebration. This is a traditional Filipino celebration whereby food is laid out on long narrow tables. Those participating in the feast then stand shoulder to shoulder for a blessing, after which the food is eaten with hands only. Today’s meal consisted of rice surrounded by seafood, pork and cassava. Tropical fruits and coconut water consumed directly from the coconut, were available at the end of the meal.

We were then directed to the central meeting area of the community to continue celebrating the Shelter Recovery Program. Two families were given symbolic keys to their new homes. Both expressed their gratitude in a very humble and gracious manner. The community was in a joyous mood and continued singing and dancing throughout the afternoon. At some point or another, nearly every community member went on stage to either say a few words, play an instrument or sing. Our delegation participated wholeheartedly. It was a day of being in communion with each other.