Quebec City members call for A Voice for Justice! 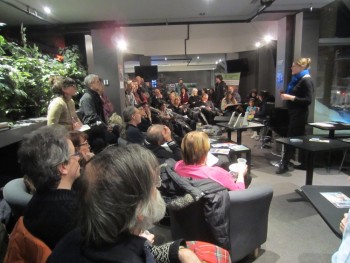 Development and Peace members in Quebec City held a week of action for the Voice for Justice campaign in their region by organizing several activities featuring Ramsey Hart from Mining Watch Canada. Bringing together representatives of Development and Peace, Friends of the Earth, Carrefour Tiers-Monde (Third-World Crossroads), Quebec Native Women, and other committed citizens from the Quebec City region, the program of events demonstrated the urgency of working for justice for communities in the Global South whose health, environment and way of life are affected by mining.

The tour began in Wendake, a Huron community just outside of Quebec City. Two representatives from Schefferville, which is in the heart of the Naskapi and Innu territory in northern Quebec, shared the realities their community are facing since iron ore mining companies returned to their region in 2011 and began digging holes around their town. It was clear that communities in the Global South and in Canada’s North share common challenges, and can show solidarity with one another.

Almost a hundred people attended a documentary screening of Life for Gold at the Cinéma Cartier in Quebec City, which explores the human rights and environmental impacts of Canadian mining operations in Guatemala. During the passionate discussion period following the screening, some audience members expressed their shame regarding the damage that Canadian companies have caused to communities in Guatemala, while expressing their pride in Development and Peace’s campaign.

The tour also included a public event at Université Laval that was organized by the university’s Development and Peace student group, strategy meetings for activists, a public dialogue in Quebec’s old city, and many media interviews which revealed how an ombudsman could provide access to justice for communities affected by the activities of Canadian mining companies.

As part of the Voice for Justice campaign, Quebec City members have also met with their MPs, including Minister Maxime Bernier, Conservative MP for Beauce, and Annick Papillon, NDP member for Quebec. Over 3,000 people from the Quebec City region have signed action cards addressed to their MPs calling for an ombudsman mechanism for Canada’s extractive industry. More cards are being signed and are being sent in time for the deadline in mid-March.

Seeing firsthand the impacts of a mine
Read more

A Voice for Justice will be heard on May 14!
Read more

A Voice for Justice: Students go mining and dig out some valuable lessons
Read more