In Institutional life
May 27, 2014
by
Khoudia Ndiaye, Communications Officer 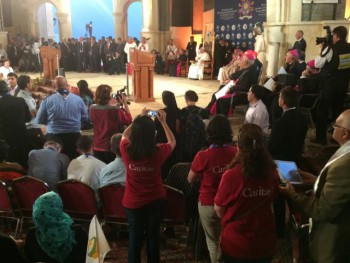 Pope Francis is currently on a pilgrimage in the Holy Land and has brought with him a message of peace. While travelling towards Jerusalem, he passed through Jordan, Palestine and Israel, and took the opportunity to highlight the work of the local Caritas offices in the region, which are helping victims of the conflict in the Middle East, mainly refugees.

On the first leg of his trip in Jordan, the Pope told dignitaries at the Royal Palace about the work of Caritas Jordan and how it is helping Syrian refugees who have been driven from their homes.

“The Catholic Church, to the extent of its abilities, has sought to provide assistance to refugees and those in need, especially through Caritas Jordan,” he said.

Caritas Jordan, which is one of Development and Peace’s partners in the Middle East, has helped over 360,000 Syrians with humanitarian aid since the start of the Syrian war through its five centres and its network of Jordanian and Syrian volunteers. Development and Peace is supporting their efforts, notably the distribution of food and basic necessities, helping to provide medical supplies and equipment, and supporting emergency healthcare to urban refugees.
Pope Francis’s final stop in Jordan was a meeting with refugees and disabled people at Bethany-beyond-the-Jordan, close to the baptismal site of Jesus. Caritas Jordan took forty Syrian and Iraqi refugees, both Muslim and Christian, to meet the Pope. The refugees had the chance to share their experiences.
“We are very happy because he will see Christians in the Arab world, he will see us and see our suffering,” said Nazik Malko, a Syrian Orthodox Christian refugee from Maaloula who was at the event. “We wish that peace will be restored in the whole world, and in Syria,” said Nazik.

Pope Francis told the crowd gathered at Bethany-beyond-the-Jordan, “My thoughts are also for the charity work performed by Church institutions like Caritas Jordan and others, who, by caring for the needy without distinction of religion, ethnicity or ideology, have shown the splendor of the charitable face of the merciful Jesus. May the Almighty and Benevolent God bless all of you and all your efforts to alleviate the suffering caused by war!”
Pope Francis continued his pilgrimage through the Holy Land on Sunday and Monday, urging Palestinian and Israeli leaders to lead their people towards peace. The Pope invited Palestinian President Mahmoud Abbas and Israeli President Shimon Peres to the Vatican to join him in praying to God for the gift of peace. “I offer my home in the Vatican as a place for this encounter of prayer, ” said the Pope.

A few days prior to the arrival of Pope Francis in the Holy Land, a delegation of 18 Caritas leaders, including Michael Casey, Executive DIrector of Development and Peace, made their own pilgrimage to the region.

“All Christian leaders we met asked us to raise awareness of the desperate situation of Christian and Muslim communities in this part of the world. We recognized that too little is known about the situation and that the media representation of these issues is often unbalanced […]. We ask you to use any opportunity you may have to advocate for political change. Such change would lead to respect for human dignity, freedom of movement and speech, and equal access to natural resources for all communities, ” they said in a statement.

Since its founding in 1967, Development and Peace has been working in the Middle East. Since the beginning of the crisis in Syria, the organization has been responding to the growing needs of the most vulnerable by working with the Caritas offices in Jordan, Lebanon, Turkey and Syria and with other civil society organizations. In collaboration with the Department of Foreign Affairs, Trade and Development Canada and the Canadian Foodgrains Bank, Development and Peace is contributing over $7 million towards humanitarian aid that is reaching 220,000 people.