In Advocacy, Education and action campaign, News from our partners
August 5, 2015
by
Geneviève Talbot, Research and Advocacy Officer 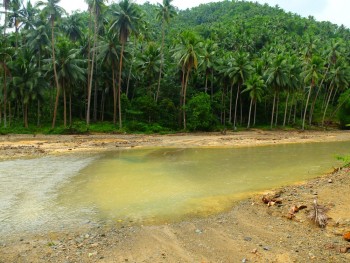 From July 30th to August 1st, the International People’s Conference on Mining (www.peoplesminingconf.net) took place in Quezon City, the Philippines. Development and Peace’s Filipino partner Center for Environmental Concern was part of the organizing committee of the conference.

More than 100 participants from 28 countries were in assistance at this conference, which brought together representatives from mining-affected communities, miners, scientists and activists from a variety of backgrounds. All those present shared one common concern: the impact of mining on local communities. This conference was an opportunity to share experiences on struggles and campaigns related to mining, and to be updated on the latest scientific data on the impacts of mining. Participants also shared successes and defeats, and identified ways to take common action in the future. Ariane Collin, a member of Development and Peace, and Geneviève Talbot, Advocacy and Research Officer, were there to represent Development and Peace at the conference.

The discussions there strongly illustrated the words of Pope Francis from a speech he made on July 9th during the second World Meeting of Social Movements in Santa Cruz de la Sierra, Bolivia. The Pope called on social movements that are struggling for the “sacred rights” that are the three “L’s: labour, lodging and land,” to come together on the international stage to make heard “the cry of the excluded” throughout the world. He also urged that they continue their “process of change” because we can no longer support a system that is “intolerable” and “runs counter to the plan of Jesus.” He added that “it is essential that, along with the defense of their legitimate rights, peoples and their social organizations be able to construct a humane alternative to a globalization which excludes.”

The Church has shown growing concern over the negative impacts of mining on people and the Earth, and in mid-July, the Pontifical Council for Justice and Peace (PCJP), in collaboration with the Latin American network Iglesias y Mineria, organized the meeting “In union with God, we hear a cry,” in Rome that brought together representatives of communities affected by mining activities from 18 countries. Cardinal Turkson, President of the PCJP, concluded the event by expressing to the communities present: “We are aware of your isolation, through human rights violations, persecution, and an imbalance of power.”

The communities present issued an open letter a few days after the meeting to put forward their recommendations, hopes and conclusion that “the Church cannot simply be a neutral mediator between the communities and the companies.” During the three days of the ICPM, participants focused on the process of change that Pope Francis spoke of, and when they return to their respective countries they will begin to work on building this wind of change.