In News from our partners
July 10, 2012
by
Mary Durran, International Programs Officer for Latin America 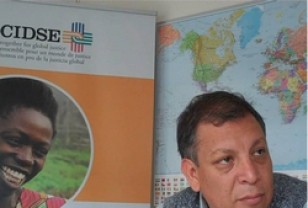 "The government is mistaken if it thinks that with bullets, torture and punches it will control the just demands of Cajamarca. The president shouldn't just defend investment. He should defend the fundamental rights of Peruvians."
- Marco Arana, environmental campaigner

Five citizens have been killed and a former catholic priest injured by police and temporarily detained – all in a context of social unrest around a proposed operation of the US mining giant, Newmont in Cajamarca, northern Peru. The coalition of Catholic agencies, CIDSE, which Development and Peace belongs to, wrote yesterday to President Ollanta Humala, calling on the government of Peru to guarantee communities affected by mining projects the right to peacefully express their opposition.

Violence flared last week, between July 2nd and 4th, in Cajamarca, when protesters and police engaged in a violent confrontation, resulting in the death of five citizens and injuries to several police officers. The government was quick to declare a state of emergency, outruling all peaceful protest. On July 4th, Marco Arana, a high profile environmental activist who has defended the right of communities to refuse mining projects, was arrested by police as he sat on a bench in a city park. Police beat, kicked and insulted former Father Arana, causing wounds to the head and jaw, and in the kidneys. Watch a clip of the beating.

Marco Arana was the subject of Stephanie Boyd’s film, Operación Diablo, which detailed an intelligence operation mounted by the Peruvian government against all those opposed to mining projects in this area. Arana’s work in support of local communities also earned him the prestigious Time magazine environmental hero award in 2009. Arana was released on July 5th; no substantiated charges were brought against him.

In the July 9th letter, CIDSE raised its concerns about increasing militarization of the area as a response to social protest. “We are concerned that such forms of state intervention are becoming a recurrent practice to resolve social and environmental conflicts, and we believe that these are not the way to ensure the execution of mining investment in Peru,” CIDSE Secretary General Bernd Nilles wrote.

For the last six months, residents of Cajamara have been peacefully protesting in defence of their water rights, in the face of the proposed US$5 billion Conga gold mine. The project threatens to use water from pristine local lagoons, which constitute the water supply of local communities. Local residents also fear serious pollution, and say that the jobs created by the project do not justify the disadvantages. They accuse the government of going ahead with the project despite its threat to local interests.

CIDSE called on the Peruvian government to promote informed dialogue as a way of resolving the crisis, in which the rights of the local population are taken seriously.  It called also on the state to carry out a thorough investigation into recent events in Cajamarca, and to use the judicial system to ensure that all those responsible for violence, including state forces, are punished. It also called on the government to respect the rights of all those detained for peaceful protest, to avoid arbitrary detentions and guarantee the right to due process.

Development and Peace partner CEAS continues to monitor the situation regarding social unrest generated by mining projects in Peru.

As the Olympics draw to an end, no Olympic gold for Rio’s poor
Read more