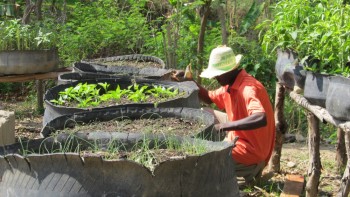 April 17th marked International Day of Peasant Struggles. This day was launched in Eldorado dos Carajas, Brazil, in 1996, after the assassination of 19 peasants who were members of Brazil’s Landless Rural Workers' Movement (MST), a Development and Peace partner. Around the world, peasants are struggling daily against deforestation, land grabbing, the polluting of water and soil, but also to improve their living conditions. Peasant struggles affect us all, because they not only touch questions of land rights, but also those of food sovereignty and the respect for the environment.

In Haiti, foreign imports are prioritized to the detriment of local production. It is aberrant that imported products cost less than locally produced foods, and this reality leads to a significant weakening of the local economy. Moreover, an increasing number of foreign agricultural companies are interested in becoming established in Haiti, which would diminish the population’s access to land and their capacity to feed themselves.

In order to respond to this problem, a number of Development and Peace partners, such as MPP, ITECA and IRATAM, are clearly demonstrating the importance and value of the Haitian peasantry, and are seeking an agrarian reform designed to promote food sovereignty. In order to achieve this goal, a powerful mobilization of the peasantry is required, along with a campaign to raise awareness amongst the population, as a way to gain greater leverage with the nation’s authorities so that the project can be adopted.

Promoting small-scale farming would also help reduce the rural exodus that is currently taking place and exacerbating the vulnerability of young people and families who settle in slums or on the periphery of big cities. Cité Soleil is just one example. Young people who live in these neighbourhoods often become involved in criminal activities and sometimes join gangs, including armed gangs, in order to survive. This is a challenge facing the organization Justice and Peace, which is working to promote a culture of peace in the poor and marginalized neighbourhoods of Port-au-Prince.

So it was that on March 22nd, The Peasant Movement of Papaye (MPP), a partner of Development and Peace in Haiti, celebrated its 40th anniversary in a festive and musical atmosphere, but laso taking the opportunity to mobilize the population for change. Chanting the slogan MPP, 40 ane aprè! Nou la pi rèd nan lit pou chanjman sosyal (MPP, 40 years later! We’re still resolved in our struggle for social change!), over 40,000 people paraded through the streets of the Central Plateau to call for agrarian reform, food sovereignty, and the abolition of structures of exploitation and domination at the national and international levels.

Currently shut out by the State when it comes to reflecting upon and choosing agricultural policies, peasants need to be present and at the very heart of the renewal process. They should and must be included in nationwide reflections, since they have a great deal to contribute towards improving the living conditions of the Haitian population as a whole.