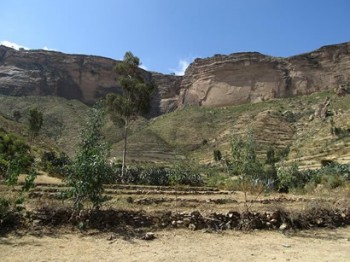 It is hard to imagine that 80% of the population in Ethiopia relies on agriculture for its sustenance, when on your way to Adigrat in the far North of the country. Leaving Addis by plane, below there is a mosaic of greens that swath the landscape. It doesn’t take long, however, for these small pastures to be replaced by rising mountains of rock. The landscape looks remote and inhospitable. The mountains rise like tables rather than peaks, and there is not a hint of vegetation. Views from the air can be deceiving and surely there is more to the landscape than these imposing rocks.

Yet, even after we have landed and begin to drive along the road, the rocks remain. There are there along our sides, rising for miles and miles with their flat tops that touch the sky. I have rarely seen such barrenness. An occasional stunted tree manages to lift itself from the faded yellow grass. Everything seems yellow and grey yet with the contrast of the blue sky there is a stark beauty in the jutting walls of rock where in the shifting shadows of the sun there are faces that appear and disappear.

It is hardly imaginable that anything could be harvested here, let alone that there is life. Yet, as we make our way along the road, there is life everywhere. Stone houses seem to grow out of the rocky plains and silhouettes of people appear out of nowhere in the distance. Perhaps, there are hidden valleys around the bend, where there is the possibility for food to grow? It is hard to say from this perspective what is beyond all that rock, but certainly the impression it leaves is one where life as fragile as trying to make your away across the stony paths ahead.