Nigeria: Coming face-to-face with survivors of Bring Back Our Girls and the terror of Boko Haram 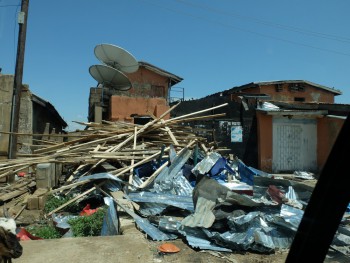 For some time now, and with more and more insistence in the last few months, our partners in Nigeria, particularly in the North, have mentioned in our conversations the combined effects of violence and insecurity following attacks by the armed group Boko Haram. Not only are these partners forced to restrict the scope and frequency of their activities, but they must also deal with the emergence of humanitarian concerns. Their reality came into sharp focus on May 12th when the world watched in horror the dissemination of a video boasting of the abduction of more than 100 girls from a school in Chibok. In outrage, there was a global mobilization that launched the #BringBackOurGirls movement, which Development and Peace supported through its social media networks.

It was in this context, that I made preparations for my mission to Nigeria. The initiatives borne by our partners there for the benefit of the most poor and vulnerable have not escaped the state of insecurity and violence that has resulted from the attacks by Boko Haram, and this became an increasingly important item on my agenda. Moreover, Boko Haram is apparently carrying out its activities well beyond northern Nigeria, particularly in Cameroon and Niger, where, according to reports, significant cells are very active. As such, I decided to head to Niger first in order to deepen my understanding of the situation.

Contending with bombs is a part of daily life

My stay in Niamey, the capital of Niger, unfolded as planned. I met with various people involved in politics, media, religion and research who are directly experiencing or analyzing the impacts of the Boko Haram phenomenon.

But as I was about to leave for Abuja, the Nigerian federal capital, I learned that a bomb attack in Abuja had just caused the death of around 20 people and resulted in many injuries. Between the panic of my family members back home and the strict safety guidelines coming from the Development and Peace office in Montreal, the Abuja leg of my trip was cancelled without further ado. Instead, I travelled to Jos in the North. Yet, upon arriving I learned that the day before, more than a dozen fans watching a World Cup game in a hotel in Bauchi - which was my scheduled next stop - died in a bomb attack. I could feel that our very long-standing partner there was extremely nervous. Neither he nor I brought up the bomb attack in our telephone conversations. We went over the program and the logistical arrangements of my visit. I took note of his assessment of the risk that I was about to take and the dangerous nature of my undertaking, and concluded that if it had been too dangerous, he would not have run the risk of letting me come… So, I went as planned, despite the noticeable prevailing gloom. Thankfully, everything went well. For me, all things considered, it is was also important to show solidarity with our partners who risk their lives and those of their family members each and every day.

Meeting with survivors of Chibok

Once I headed south - a long way from the bombs bursting in the North - I was under the impression that I would be able to focus completely on our partners' work in metropolitan Lagos and surroundings. Wrong! One of our partners, who is fighting for the rights of women in Nigeria, has become very involved in the national campaign calling for the return of the girls kidnapped in Chibok.

During my meeting with the partner, her phone did not stop ringing. After another phone call interrupted us, she revealed the subject of these incessant calls. Her organization had been been contacted by a community association based in Lagos that is dedicated to promoting the interests of citizens of Chibok. The association had apparently managed to smuggle three survivors of the group of young girls kidnapped by Boko Haram out of Chibok to Lagos. She is expected to meet with the three girls and must leave me. That's when, without much conviction, I asked if I could tag along. “Why not?” she replied.

I am, despite myself, plunged back into the violence and human suffering that I thought I had escaped after my stay in the northern cities. The three girls we met, 17, 18 and 19 years old, still seemed to be under the effect of the swirl of emotions generated by the trials they experienced since their abduction. Their voices and lost eyes betray deep pain. The insurgents broke into their boarding school in the middle of their sleep and transported them into the forest in the dead of night, causing them profound humiliation. Glimmers of humanity shine through only when they courageously recount the details of their escape.

Despite days of walking and all the obstacles they faced, there was a festive reunion in the village upon their return. Such joy, however, is bittersweet because, despite massive international mobilization, more than a 200 girls are still missing, a realization that puts a damper on all the celebrating. It’s a surreal story that we would never have wished to come true, and unfortunately it seems far from being resolved. Of course, our greatest wish is well known… #BringBackOurGirls!