In Niger, an ocher landscape tinged with green in the middle of the Sahel

In Emergencies
August 12, 2014
by
Stéphane Vinhas 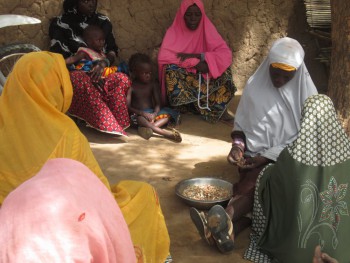 We are travelling down a paved road in western Niger, on our way to the village of Garbay Tombo, which is participating in a project being spearheaded by Caritas Niamey. The horizon is ocher, dotted with greenery. There are trees scattered here and there and shoots of millet struggling to emerge from the ground, hampered in their efforts by the absence of regular rainfall. On the side of the road, a herd of magnificently horned cattle are lumbering along slowly, laboriously, in the sweltering heat. They head to a muddy water hole where they can slake their thirst. When we reach the village, the villagers seat us on two wooden chairs. Sitting on mats in front of us, the men are feign seriousness on one side, while the women laugh merrily on the other. There is an atmosphere of good humour. The village chief welcomes us. He explains what we had already guessed on the road in: the rains fell late and the first plantings were lost—there hadn't been enough water and it didn't fall in time—so the villagers will have to redo their work and replant their seeds.

In this village 100 kilometres from Niamey, the main causes of food insecurity are the irregularity of seasonal precipitation, the inability to manage rainwater and drought, and the rise of food prices during shortages. In this region of the world, there are also other aggravating factors, both natural (locust infestation, floods, fires, epidemics, cattle diseases, etc.) and those caused by humans (brush fires, land disputes, conflicts, insecurity, political instability, lack of public funding, etc.).

We had the chance to visit the ongoing project. First, there's a granary for emergency provisions and a community seed-reserve system to ensure the stability of purchasing and selling prices, thus avoiding excessive speculation during shortages. This system is managed by and for the villagers themselves. Next, there is an irrigation system, run with sustainable energy, used to water a community garden around the village's perimeter. While water is scarce, there is no shortage of sunshine and it provides plentiful energy. Solar-powered pumps have been placed in the village's century-old well. This allows easy and efficient watering of a community vegetable garden planted for the benefit of the most vulnerable women in the community. The garden is enclosed by an iron fence—instead of one made of wood, to avoid cutting trees—to keep away the animals in the village, which have an unfortunate habit of destroying, eating and trampling fields that are not protected.

These initiatives, which are part of the government's 3N ("Nigeriens Nourish Nigeriens") strategic policy framework, are elements that will enable them, insofar as possible, to strengthen the resilience of local populations and contribute to food security and sustainable agricultural development.

Much remains to be done in the Sahel. Development and Peace will keep its commitment: we will continue to support resilience projects in a context of chronic crisis and humanitarian aid projects during acute crises. And one thing that is obvious has once again be confirmed: it is in the coming together, when men and women work in concerted action with a common goal, that the strongest bonds of peace are woven in this region.