A New Leaf: A timely reminder that a crisis does not just disappear

This summer, I travelled to Niger and Mali to report on the food crisis that was gripping the Sahel region of West Africa, as well as the impact that political instability in Mali was having on the population. Accompanying me for the Niger part, was a crew from Salt and Light Television, who we had invited to come to document how the population was coping and our response. Together, we visited villages where the threat of hunger was a daily struggle. We also visited a refugee camp for Malians fleeing the violence in their own country. We could see the despondency of the people in the camp, having been completely uprooted from their homes and without any real idea as to when they would be able to return, if ever. It was a journey of discovery for all of us, and I was anxious to see how this story would be told in the documentary.

Once, I arrived in Bamako, the capital of Mali, the atmosphere was strange and heavy there. It was as if the rhythm of this bustling city had been put on pause as the political crisis and the question of how to deal with it hung in the air. Travelling with Caritas Mali, we stayed in the southern part of the country because the North had been taken over by rebels groups. Even in such circumstances, however, the pace of daily life must continue. People had to plant their fields, even as their stomachs groaned with hunger. Yet, the thought that just a few hundred kilometres away, there was conflict, people were living in fear, resources were dwindling with little aid available, and a military intervention could begin at any time, was never too far from the minds of anyone.

After that, I was even more impatient for the documentary from Salt + Light to be ready. There was hardly any media coverage of what was happening in the Sahel and it felt urgent for people to know more about this underreported part of the world. But to create such a piece of work takes time, particularly to tell such a compelling story. And now in restrospect, as we premiere the documentary with great excitement across the country this week as part of our Share Lent campaign, I don't think there is better time for it to be shown. 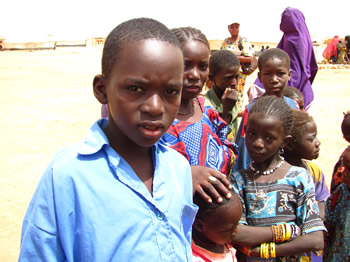 The inevitable military intervention in Mali began this January, with many questions about the future hanging in the balance. Refugees continue to cross into neighbouring countries, while local populations continue to try to recover from last year's food crisis. If the hunger crisis was underreported then, it is even more so now, particularly in terms of what is next and what can be done to ensure that the people of the Sahel do not have to face the injustice of hunger on a recurring basis. A New Leaf helps us to remember and to reignite the debate on the part we often forget when a crisis has passed - that recovery, resilience and prevention are equal parts of the equation, and we must continue to care if we want all to live dignity.

We are fortunate to have with us Father Isidore Ouedraogo, Executive Secretary of Caritas Burkina Faso, as a participant in panel discussions happening after each screening. Burkina Faso was one of the countries most affected by the crisis, and continues to receive refugees on a daily basis from Mali. At our first premiere in Ottawa on Monday, Fr. Isidore was able to share with those present what is now happening in his country. It was a wonderful exchange that we hope others will be able to experience at the upcoming screenings in Toronto (Feb. 28th), Winnipeg (March 1st), Vancouver (March 2nd) and Victoria (March 3rd). It is not too late to RSVP at anewleaf@devp.org or at 1 888 234-8533. For more information, visit devp.org/anewleaf.