The negative impacts of mining on women in Sierra Leone

Sierra Leone is a resource-rich country with significant deposits of iron ore, diamonds, bauxite, rutile and gold. The mineral resources are contributing about 24% to the country's GDP and over 80% export income. The country is also currently ranked 184th on the Human Development Index (HDI), according to the last report by the United Nations Development Programme (UNDP). Most striking of all is that the communities where these mines are located benefit little, if at all, from the revenues generated. Roads are poorly built; if there is electricity, it is mainly used to supply the mine; and access to state services (health, education, etc.) is limited. Rather, nepotism, corruption, political bribes and violence are the main results of mining in Sierra Leone. 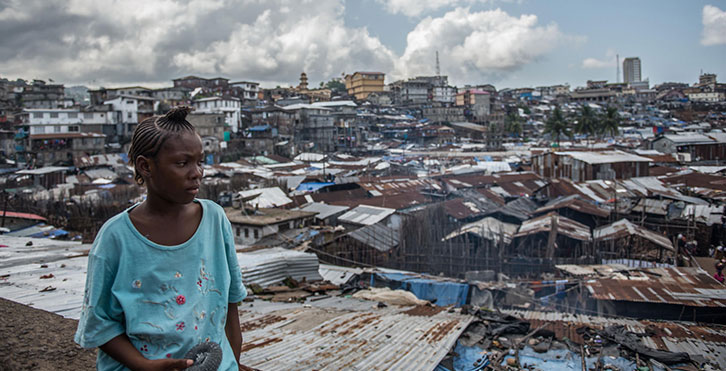 Mining in Sierra Leone is practiced in many ways, including large-scale, artisanal and small-scale mining, as well as illegal forms of mining that are supported by local authorities. Whatever shape mining takes, it tends to increase the vulnerability of women and girls. It has been noted that in mining communities there are increases in domestic violence, cases of rape, prostitution, an upsurge in teenage pregnancies, child labour… the list goes on.

How does mining contribute to the deterioration in the quality of life of women and girls in these communities? Usually, by weakening existing social ties, i.e. the very foundation of community vitality. Often, communities are displaced to make way for the mine and moved to locations that are far from their workplaces, schools, and places of worship. This separates families and undermines community life. Even when people are not displaced, their traditional means of subsistence, generally small-scale farming, is greatly affected by a deterioration in the quality of the soil, water, and air that stems directly from the nearby mining operation.

Mining exploitation also tends to be accompanied by an influx of foreign workers in the community, mainly men who work under very risky conditions and are underpaid. At best, this influx leads to the development of a parallel and often underground economy, dependent on these workers. And at worst, it brings with it prostitution, child labour (minors are best suited to squeezing through narrow pathways, or to acting as carriers for example), sexual exploitation, and violence in general, including gender-based violence.

Faced with this situation, women impacted by mines in Sierra Leone have decided to get organized and to speak up. On December 10 and 11, 2018, they participated with the support of Development and Peace – Caritas Canada in the first National Conference on the Impacts of Mining on Women and Girls in Freetown, the capital city. During the conference, organized by our partner WOME (Women on Mining and Extractive), decision-makers in Sierra Leone were compelled to listen. Woman and girls want to be heard by these authorities, who need to be made aware of the impacts of mining on women’s lives, on the lives of their children, and on local communities.

Development and Peace supports associations that aim to promote women's participation in decision-making in their daily lives, along with their participation in public life. Empowerment, associative involvement, and the improvement of women's economic conditions are the key elements of our approach.

They also want national authorities to be aware that they are informed on the laws that protect them and govern mining. They know that they have the right to say no to mining development on their lands, and that they should benefit from the revenues generated if they choose to say yes. Facing the impacts of mining, these dignified and proud women have developed other means of subsistence so as not to depend on mining alone.

Thanks to their actions, their quality of life has improved, their children have returned to school, and community ties have been woven again. By speaking up this way, by standing up for themselves, they force us to question the need for mineral resources, i.e. do we really need more minerals? Is the cost of mining really worth it? What if we learn to live differently? To better cherish what we have, to take care of our possessions so as to keep them longer, to learn to repair our objects, and to reuse them? And if instead of companies and shareholders benefitting, we help ensure that the communities themselves take charge of their own development and are organized to counter exploitation.