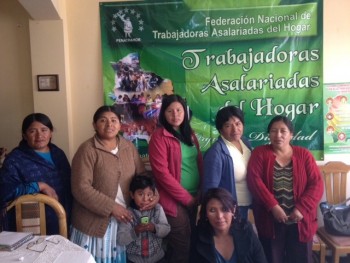 These women have come a long way - both literally and metaphorically! Nineteen- year old Diana Garcia, member of the executive board of the National Federation of Domestic workers (FENATRAHOB), came from a life of domestic servitude that started when she was only 12 years old in Pando, one of the remotest reaches of Bolivia. Today, Diana is studying law at the University of Bolivia.

Diana is an embodiment of FENATRAHOB’s slogan, “de la cocina a la oficina” – from the kitchen to the office, that is the central philosophy of the women of FENATRAHOB, who today number about 1,000 members. Development and Peace started supporting these women in 1999, and their trajectory is one of our success stories.

Felicidad Yugar is one of the senior members of the elected executive board. She remembers a time when her monthly salary of 30 bolivianos could not even buy her a pair of ordinary work shoes. She arrived in La Paz with her mother and siblings in the mid-70s from a mining town in central Bolivia. Her father, a miner and union leader, whose lungs had been wrecked by the miners’ disease silicosis, had been murdered by the thugs of the Hugo Banzer dictatorial regime. Felicidad’s father was a passionate defender of the rights of his brother miners, and he inspired his daughter’s life struggle for the dignity of the domestic worker.

At 15, on arrival in La Paz, Felicidad had no choice but to abandon school and become a live-in maid. She worked an average of 14 hour days, starting at 6 a.m., and resting only every other Sunday.

“We were treated as animals at that time,” recalls Prima Ocsa, another executive member of FENATRAHOB. Slowly, the women of FENATRAHOB began to organize and to reach out to all domestic workers. By 2003, their membership had grown to all departments of Bolivia, and new legislation was passed, giving the women rights for the first time, including entitlement to days off, paid holidays, a minimum salary and protecting them from arbitrary dismissal.

But the women soon realized that the real work still lay ahead. Having a law was one thing, but ensuring it was applied was another.

Yet the work of these tenacious women is paying off. Through an informal grapevine, older and more experienced domestic workers reach out to young girls who have just arrived from rural areas. They produce newsletters and radio ads, run information exhibitions and facilitate access to part-time study programs. FENATRAHOB also runs a free telephone helpline where women can call for information on their rights.

Felicidad has since learned basic office administration. She continued to be a domestic worker until recently when she was fired by her employer when she demanded, for the first time ever, her right to take New Year’s Day off. It was not an easy situation.

“As a maid, one becomes emotionally attached to the family, to the children that we raise as our own. Because we have to work so hard, we neglect our own children, and our husbands. A domestic worker ends up sacrificing a lot.”

Today, there still needs to be a better application of the 2003 law, and domestic workers still have no legal right to health insurance. But among other gains, their struggle has led to the ratification by Bolivia of the brand new ILO (International Labour Organization) convention 189, on the Rights of Domestic Workers. The Bolivian Congress has ratified the treaty, and they are waiting for confirmation in the Senate.
“
It is an important gain for us,” says Prima Ocsa. “It is now official, our struggle for justice and dignity is also an international and universal one, it’s not just Bolivian. This will be an important tool.”

Because of the CIDA cuts, Development and Peace has had to cut funding to FENATRAHOB, who will no longer be after the current project ends in October 2013.

Watch a member of FENATRAHOB give a testimonial about their work: http://www.youtube.com/watch?v=TcCb62I-lOA

Bolivia: The impact of a mine on a community’s women
Read more