Many remain vulnerable to hunger in the Sahel

In Field visits, News from our partners
July 9, 2014
by
Khoudia Ndiaye, Communications Officer 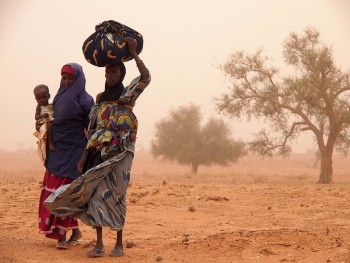 Two years after the serious humanitarian crisis that affected 16 million people in the Sahel region of West Africa, Development and Peace remains on alert. In 2013, the situation improved slightly, but the harvest was still not plentiful enough to fill the gaps, and the ongoing conflict in Mali continued to destabilize the population. Thousands of vulnerable families are still confronted with hunger and growing poverty.

Given the continued threat of food insecurity in the Sahel, Development and Peace is intensifying its activities in Mali, Niger and Senegal. “Despite a slight improvement in the situation in the Sahel, a chronic food crisis persists due, among other things, to low rainfall and the various conflicts affecting the area,” notes Stéphane Vinhas, Emergency Programs Officer with Development and Peace.

In trying to deal with the constant threat of hunger and to meet the needs of their families, some Sahel residents have been forced to sell some of their few possessions. Others have gone into debt, selling off their harvests without actually knowing what their yields would be. As a consequence, people are increasingly vulnerable.

“Our local partners are working as closely as possible with people in the region and they alert us as soon as the situation deteriorates, so we can quickly take action to prevent the situation from worsening. Based on the analysis of the situation by our partners in the field, we have decided to intensify our activities,” adds Stéphane Vinhas.
Development and Peace is currently putting in place various projects in conjunction with Caritas Mali, Caritas Niger and Caritas Senegal that are designed to reduce the negative effects of last year’s poor cereal harvest and to help populations affected by food insecurity regain their livelihoods.

In Mali, Development and Peace is helping to improve the food and nutrition situation of vulnerable households in the dioceses of Kayes, Bamako, Sikasso, Ségou, San and Mopti. In Niger, there is a project in place to help make food and seeds for the rainy season more accessible for families affected by food insecurity in order to increase the buying power of these vulnerable households. Finally, in Senegal, where almost a fifth of households suffer from hunger, Development and Peace is implementing a project designed to bring food supplies to people in the dioceses of Saint-Louis, Ziguinchor and Kolda, and to strengthen their resilience.

“Let’s not forget our sisters and brothers around the world who are suffering. We can help them bear their burden and can share our daily bread with them as well,” says Reverend Ambroise Tine, director of Caritas Senegal. “Undernourished people need access to enough wholesome food to live a dignified life.”