In Members in action, News from our partners, Solidarity trips
July 3, 2014
by
Christina Lipinski, Member of Development and Peace 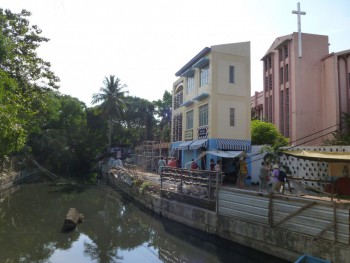 A group of 12 Development and Peace members from the Prairies and the Atlantic provinces, accompanied by two staff members, are on a solidarity trip to the Philippines. They will be visiting eight Development and Peace partners and some of their projects in the capital city of Manila, in southern Mindanao and on the islands of Leyte and Samar – where Yolanda (the Filipino name for Typhoon Haiyan) first made landfall on November 8th of last year. We invite you to follow their adventures and learnings as they travel through the Philippines for the next two weeks.

Today our group was able to see first-hand the result of years of dedication, optimism and very hard work. We met with two of our partners who are both working on similar housing rights projects for the urban poor.

The first partner we met was the Community Organizers Multiversity (COM) which is supporting a local community in their struggle for housing rights. Despite the fact that COM is the driving force in the project, its staff were on the periphery for this meeting as they allowed representatives from the community organization, APOAMF, to present to us. The meeting was held in an informal settlement, or slum, allowing us to see clearly into the lives of these people. APOAMF is made up of urban poor who live alongside the Manggahan floodway in Pasig City, a division of Metro Manila. Just over four years ago they were faced with eviction and forced relocation from their homes as the government wanted a new development in the area.

The second partner we met was Urban Poor Associates (UPA) in Manila. We first met in their office where the executive director, Denis Murphy, gave us some background into the situation. Much like the first group, a community of urban poor were being forced to relocate as there was pressure to clean up the area where they were living and slums are not a part of this vision.

For both of these communities, the location where the government wanted to relocate them was 100 km away from Manila, over a four-hour drive. This displacement would mean them leaving family, schools and jobs. They would also lose their ability to support themselves as they would not have the same opportunities as the city.

The communities both began to look into their housing rights and organized themselves, with support from Development and Peace’s partners, to find a better alternative. After 4-5 years of meetings and planning both groups were able to come to an agreement with the housing authority to build low-rise apartment buildings rather than be relocated.

We were able to visit the construction sites of both housing projects. The group working with COM are building apartment-style structures across the street from their current homes that are able to house 60 families with five family members inhabiting a 24m2 unit. Currently two buildings are under construction and more are being planned to house a total of 900 families. The second community group, supported by UPA, has completed one model home so far with the bottom level designed for commercial businesses and the top two floors each having a 18m2 units. The idea for these units is that if there is flooding the housing units will not be affected.

Upon reflecting with our group at the end of the day, it was brought up that these projects were both small steps in that, for both these communities, they are just at the beginning of starting over, and in the big picture of Manila, they are only a drop in the bucket. However, for each of these communities it is a major step toward defending their human rights and allowing them to realize the extent of the control they have over their own lives.