In Mali, hundreds of thousands of people threatened by clashes

In Emergencies, News from our partners
January 16, 2013
by
Khoudia Ndiaye, Communications Officer 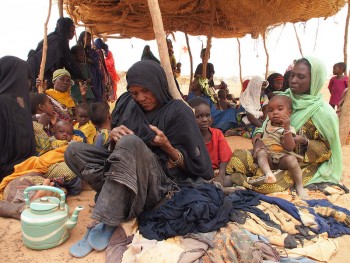 The French military intervention currently taking place in Mali has been making headlines. Although supported by the vast majority of Malians, it also carries with it the risk of worsening the humanitarian situation for the population, especially for those in the North. The 200,000 people still living in this area are now even more affected by the state of emergency, as declared by President Dioncounda Traoré. "I fear for the people of the North today. We know that this population is in a very precarious situation. With the closing down of the roads, there is no possible contact with the population, which is being left to their own devices. It is therefore urgent to open up a humanitarian corridor to be able to send them help," said Gaston Goro, communications advisor and emergency relief officer at the National Secretariat of Caritas Mali.

The country is experiencing an unprecedented crisis in which food insecurity is being added to a serious political and security crisis that is taking place mainly in the North but is threatening the entire country. The UN estimates the current number of internally displaced persons at 230,000 while there are an additional 150,000 refugees in neighbouring countries. Last summer, staff of Development and Peace visited a centre in Bamako that was already hosting displaced families (approximately 100 people) who fled the North of the country due to the conflict. Neighbouring country Niger is also hosting thousands of Malian refugees. Local partner organization Caritas Niger is helping at a refugee camp with the registration of new arrivals and by providing some non-food items.

In that context, Caritas Mali is preparing an urgent mission to assess the situation so that it can better help the people who are on the move towards the southern region of the country. Their situation will certainly become more complicated with the destruction of health infrastructures, administrative structures and schools. It is therefore urgent to find ways to deliver humanitarian aid.

Development and Peace raised more than $2.2 million following an appeal launched in May 2012 to help the 18 million people affected by a food crisis in the Sahel and West Africa, including Mali. The organization primarily supports far-reaching food-distribution projects. "The actions taken in Mali as part of our plans to promote food sovereignty have helped avert a humanitarian disaster in the Sahel region, which is faced with recurrent food insecurity. The harvest was good this year, which allowed the farmers to have some hope. However, the currently prevailing conflict will cause thousands of families to move towards the country's southern region and to neighbouring countries, which will put extreme pressure on the family farmers who will find themselves obliged to feed a larger number of people," reminded Guy Des Aulniers, Emergency Relief Programs Officer at Development and Peace.