In Emergencies, News from our partners
January 30, 2013
by
Khoudia Ndiaye, Communications Officer 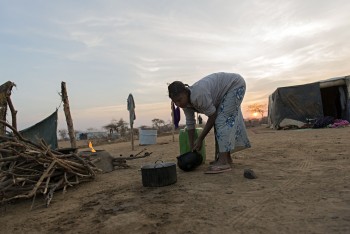 According to figures from the United Nations High Commissioner for Refugees, more than 7,500 Malians have fled their country in the last two weeks. The intensification of fighting has compelled entire families, some of them in car or truck, others on foot or on the backs of donkeys, to seek refuge in neighbouring countries (mainly in Niger, Burkina Faso and Mauritania). Thus, in addition to the already 229,000 people displaced inside the country — mainly inhabitants from the cities of Kidal, Gao and Timbuktu who have headed south — the number of Malian refugees in neighbouring countries has risen to nearly 150,000.

The refugees are not just fleeing the heavy fighting, they also fear a new food crisis. The population's food situation, which was already precarious, has deteriorated considerably since the conflict began. Food supplies are dropping, cereals are seriously lacking, and some farmers are being forced to kill their livestock to feed themselves. It is the same situation in the neighbouring countries that are hosting the refugees. "The situation in some villages in Niger is uncertain. Even though the harvest was good, people have already consumed most of the food and they are very worried. The price of cereal is climbing in the markets, which is increasing anxiety in the population," said Danielle Gobeil, currently on a mission for Development and Peace in Niger and Burkina Faso.

Overall, humanitarian needs continue to increase and access to the most vulnerable populations still remains blocked. The priority is to be able to distribute essential goods (chiefly food and medicine), and provide the refugees access to health care and shelter.

Malian bishops have not remained indifferent and have expressed their concern about the turmoil the country is currently experiencing. At a recent meeting of the Episcopal Conference in Bamako, they issued a call for solidarity with "our compatriots directly affected by the conflict: the internally displaced, refugees, the bereaved families, the army and the security forces." They also went to Bamako's largest hospital to visit those who had been wounded following fighting. In these difficult times, the Malian Bishops' Conference also decided to use the occasion of Lent, which begins on February 13th, to launch an appeal for a national mobilization to collect "financial and material resources to help" the victims of the conflict.

"Thank you to all those people who are sending us words of support and encouragement. Thank you to all those who have already sent in contributions in response to our appeal. A big thank-you to those who are working night and day to organize their resources to support us. And our thanks to those who include us in their daily prayers so that we might banish violence and hatred from our hearts. God bless you!" It is with these touching words that Father Isidore Ouedraogo, Executive Secretary of OCADES (Caritas Burkina Faso), expressed his feelings on January 22nd concerning the war currently raging in Mali.

The Sahel Caritas organizations are already engaged in programs to assist refugees and displaced persons. As part of an emergency plan targeting 45,000 people, they plan to start distributing 1,900 tons of food rations for a three-month period, along with 350 tents, 30,000 blankets and 1,000 hygiene kits.

Faced with this crisis, Development and Peace has contributed $50,000 towards aid being given by its local Caritas partners to the most vulnerable affected by the situation.