Mali Emergency: Development and Peace is supporting Caritas in the Sahel

In Emergencies, News from our partners
February 26, 2013
by
Khoudia Ndiaye, Communications Officer 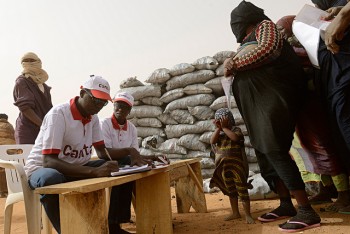 The ongoing conflict in Mali is the result of a complex series of events in which each player has defended their own interests. Secessionist ambitions, control of natural resources, the imposition of sharia, are all claims raised by a variety of national and international actors. After launching a military offensive in early January 2013, French troops supported by African troops have now taken control of almost the entire territory, but the instability persists.

The North has seen aerial bombardments and heavy fighting, and the rebels continue their invasion of towns. Many people have fled the unrest either further south or to neighbouring countries. After a year of fighting in which the government was brought down by a military coup, the UN said there were over 200,000 internally displaced people in Mali by the end of January 2013. Over 150,000 Malians have fled to Mauritania, Burkina Faso and Niger. People have been killed during the conflict, endured sexual violence, torture, have disappeared and child soldiers have been used.

To make matters worse, food prices are high, not just because of the conflict, but also because a poor harvest in 2011 which led to a food crisis in 2012. In the north, over 500,000 people need help getting food and in some places, malnutrition rates are very high.

Strengthen the capacity of local organizations and support the most vulnerable

Mali is one of the world’s poorest countries. Communities were already fighting the effects of a devastating food crisis when war took hold of their country. People who leave their homes because of unrest, also leave their fields, their schools, their chance of a stable life. War is the enemy of development, and even though rebel forces are being driven back and people can start to go home to their communities, the battle will continue.

To address the ongoing violence, it is essential to support the most vulnerable communities, particularly those who have been cut off from help. The President of Caritas Mali, Archbishop Jean Zerbo of Bamako, has asked for a humanitarian corridor to be opened to help those who have found themselves cut off by the conflict. Development and Peace continues to support the work of Caritas throughout the region as its Canadian member, which is helping families in Mali cover their basic needs by providing food, shelter and help with healthcare and school fees. The conflict has meant that for aid organizations it has been too dangerous to work in the North. Meanwhile, in Burkina Faso, Caritas is helping refugees by providing them with fuel efficient stoves and training in environmental protection. Over the past few months, Caritas Niger has been helping refugees by giving out food, health kits and coal.

Development and Peace has decided to provide $50,000 to strengthen the capacity of these local organizations in their responses to the humanitarian emergency caused by this crisis.