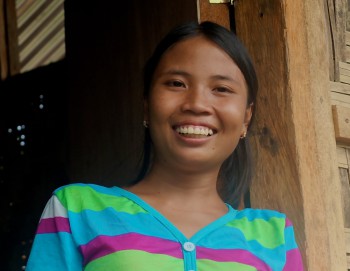 The fierceness of Typhoon Haiyan can be easily seen from the road that winds along the coast of Eastern Samar (Philippines). Every few hundred metres, out of the billowing coconut trees, another town of ramshackle houses appears, the tarps that serve as roofs flapping in the wind. With so much devastation around, it is easy to lose sight of what is beyond the palm trees.

Many of the mountainside communities here were left behind by relief and reconstruction efforts. Although not touched by the sea during the typhoon, these communities were not spared the effects of the 320 kilometre per hour winds that bore down on the island.

This was the case for the community of Caisawan, Balangkayan in Eastern Samar. This small, sleepy town hidden in the hills is still trying to recover from Yolanda. Most of the families here live off the land, selling dried coconut. Yolanda destroyed their crops, yellowing the trees they rely on for an income and disrupting whatever else they had planted in their gardens. And without an income, it is nearly impossible to replace a torn-off roof or collapsed wall. So, like most victims of Yolanda, the people here have gathered whatever they could salvage from the debris of the storm, and pieced together as best they could some semblance of a house for their families.

Yet, what is remarkable is that despite the mismatched metals, frayed tarps, and uneven pieces of lumber stitched together, the homeowners still make painstaking efforts to create a home. They plant beautiful gardens to surround themselves with, delicate orchids blooming out of decorative pieces of bark and small vegetable gardens contained by bamboo trellises entwined with climbing vines. It is a testament to the pride that the people here have in their homes, even ones as improvised as these.

Development and Peace, with its partner Catholic Relief Services (CRS) and with funding from the Department of Foreign Affairs, Trade and Development Canada, is helping residents here have homes worthy of their gardens. There are 23 families whose homes were completely demolished by Haiyan that have just received new houses. There will eventually be a total of 84 families that will receive new shelter.

The houses are considered transitional, but they have been built with several considerations in mind to make them more resilient. For instance, the beams that provide the foundation have been anchored in cement and metal ties are used to hold down the roof. The families participated in the construction on the houses by providing sand and gravel from the nearby river. They are already starting to make these houses into homes, adding colourful curtains, interior partitions and, of course, flourishing gardens.

At a ceremony attended by the Development and Peace delegation visiting typhoon-affected communities, residents received certificates of ownership. Mary Badaran, 19, is one of those who received her certificate of ownership. This new house will make a world of difference for her and her husband, and their one-year-old daughter: “After Yolanda (Haiyan), all that was left of our house was the kitchen. I felt powerless, I didn’t know what to do," she says. "Now, we can finally sleep. Before, when it rained, we would have to get up in the night and move the bed around so we wouldn’t get wet.”

Receiving her certificate was a particularly proud moment for Mary. "It means that we own the house,” she says.