In News from our partners
June 8, 2012
by
Mary Durran, International Programs Officer for Latin America 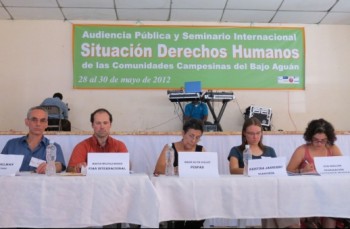 A public hearing on the human rights situation in the Lower Aguan region of Honduras took place on May 28, 2012, in the city of Tocoa, Colon. Severe land conflicts in this region continue to pit peasants against large land holders who have disputed previous governments' attempt at land reform, and have resulted in serious and ongoing human rights violations. The situation worsened dramatically after the Honduran coup d'etat in June 2009.

The public hearings, organised by nine international organizations including Development and Peace's Irish sister agency, Trocaire, heard accounts from victims of human rights abuses in the presence of representatives of the Inter-American Human Rights Commission, the European Union delegation and representatives of the United Nations High Commissioner for Human Rights. Local organisers were the Permanent Observatory for Human Rights of the Lower Aguan, a human rights project run by Development and Peace partner the Popol Nah Tun Foundation.

The public hearing concluded that the current situation in the Lower Aguan, in which 48 people affiliated to peasant movements have been the victims of violent killings since September 2009, is the most severe situation of violence against peasants in Central America in the last 15 years.

Read the statement from the hearing.