Stepping off the plane in Djibouti, the heat smacks hard and the salty smell of the sea fills the air. It is much hotter here than in Ethiopia, where the high altitude makes the strong African sun more bearable. Djibouti was the last stop on our trip and we went there to meet with Bishop Giorgio Bertin, who is Bishop of Djibouti and Apostolic Administrator of Mogadishu, Somalia, as well as the President of both Caritas Somalia and Caritas Djibouti. 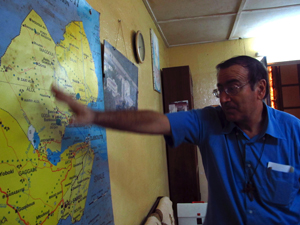 Djibouti is a tiny country. Shaped like a hoof, it is positioned where the Red Sea and the Gulf of Aden meet, directly across from Yemen. There are only 800,000 people in the country, and of this number two-thirds live in the main city of Djibouti, which has become an important port town for the shipment of goods to landlocked Ethiopia. 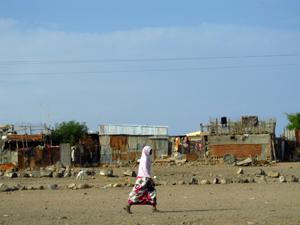 The port dominates the activities of the city, attracting migrants from rural areas and refugees, who seem to live in clusters of makeshift shelters along the margins of the city. Despite its small size there are still many needs in Djibouti, including some created by the drought. Bishop Bertin energetically explains some of the issues here: the struggle for water and failing crops in the rural areas, and the city which carries its own struggles of poverty and migration. Caritas Djibouti is responding how it can. 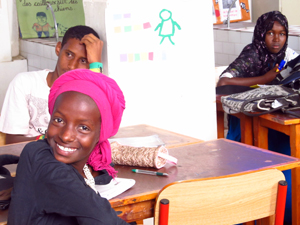 We visited a literacy centre where many street and refugee children are being given the opportunity to learn how to read, and potentially continue with their education by integrating into the school system. With a small staff on hand, and many volunteers, Caritas Djibouti also runs health clinics and other programs for street children. Spending the day with Bishop Bertin is a privilege. He spent many years working in Somalia before the fall of the previous regime in the 1990s, and although he has not been able to return to the country in many years, it is clear that his heart is still very much with the people there. He recently made an arduous journey with staff members of Caritas Ethiopia to a remote Southern region of Ethiopia where thousands of Somalis have taken refuge from the famine and conflict in their country, to tend to his people firsthand.

Ending our visit with Bishop Bertin was another reminder of the all the tireless efforts taking place around the Horn of Africa, not only in response to the current drought, but as an extensive web of solidarity that is working to bring an end to hunger and poverty here. It seems to be such a long road, but one where fatigue is not even an option. And if there is one message that everyone we met left us with, it is this: that without a commitment towards development, emergencies like this one will simply continue to be repeated.