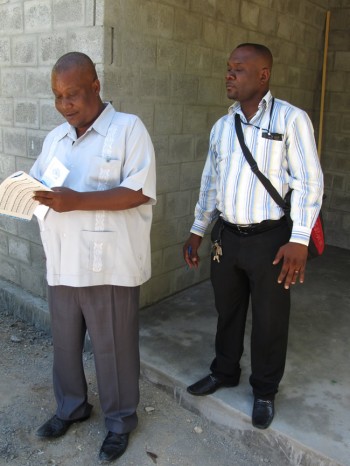 Mr. Franklin Montina is the Justice of the Peace responsible for the commune of Gressier. In the Haitian judicial system, the justice of the peace is responsible for a variety of issues having to do with civil, criminal, commercial and correctional or criminal law. Thus, he receives the deliberations of family councils and accusations of misdemeanours or crimes within his jurisdiction, but he is also responsible for ascertaining that families are actually the owners of the land on which they build their houses.

We had a chance to meet with Justice Montina during our visit to Ti-Boucan. He is a regular visitor to the neighbourhood. Accompanied by a clerk, he visits to ascertain whether or not the project's beneficiary families actually hold title to the land on which they are building. In fact, local authorities need to determine exactly who owns the land. This, however, is a major challenge because the earthquake caused the collapse of government buildings and the destruction of a large number of property title documents as well as many land registry records. There are also a certain number of problems concerning the issue of inheritance and the sale of land, as more than 250,000 people were killed on January 12, 2010.

When the families do not hold title to the property, the justice of the peace must conduct an investigation according to a very specific procedure. He explained to us that, once on the scene, he must first locate the lots geographically and assess their dimensions. He then interviews the family members to ask questions about the number of years they've been in the house and how they got their land, whether through acquisition or by receiving an inheritance from their parents or grandparents.

Once the interview stage with the family is over, he then meets witnesses who know the family in question, such as neighbours, businesspeople in Ti-Boucan, doctors, etc. The objective here is to compare the elements of the answers given by the family and determine the validity of the statements. Once this step is completed, and if the justice of the peace is satisfied, he then asks the clerk accompanying him to issue the official verification report. That way, the families have the legal proof that the land belongs to them and they will then receive a property title certificate enabling them to avoid any disputes in the future.

Thus, thanks to the collaboration of Mr. Montina, during the project's inauguration ceremony, we will be handing out to 50 families not just the keys to their new houses, but  the titles of ownership as well.