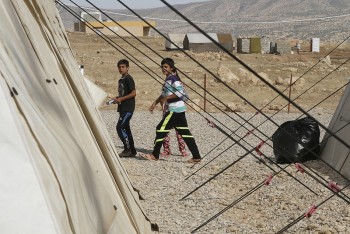 I was recently in Iraq for Development and Peace to participate in a meeting of various Caritas members that are supporting Iraqis who have been displaced by violence caused by the group calling itself the Islamic State (ISIS).

We were in the Kurdish region of Iraq, where thousands of Iraqis have taken refuge in this relatively safe zone.

While there, I met Soufian, a young Iraqi from the Yazidi community. Soufian explained to me that he fled from Sinjar with his whole tribe, after it was taken over by ISIS. Now, he lives in the north of Iraq, next to a small city called Zakho.

After exchanging a few words, he asked me: "Mr. Philippe, did you know that I am studying for my scientific high school diploma?”

For some reason, this sentence was like a slap to the face. After two days of visiting different sites and talking about the number of families and beneficiaries receiving aid from Caritas Iraq with support from Development and Peace and other Caritas members, his question was a reminder of the humanity of the situation. It was a reminder that the aspirations of Iraq’s young people are very similar to our own.

Soufian’s dream is simple and realistic: he wants to be an agricultural engineer. Right now, he lives in the basement of an unfinished building with barely enough ventilation and light - and yet he still studies. Next month he must write a big exam, which will determine if he will be accepted to university – that is, if he can find the funding to go.

In a country that is historically divided along ethnic and religious lines, what unites everyone at this moment is their suffering. Yazidis, Christians, Sunnis and Kurds all have one struggle in common: ISIS. The terror group has not spared any community from its wrath. More than 2.5 million people have fled their homes. Many left with almost nothing, so the needs are huge. People are in need of the basics, like food and shelter, but also of psychosocial support, education and work.

But hope is still there, and I witnessed a glimpse of it. We visited many programs supported by Development and Peace, including the distribution of food and other necessities, child-friendly spaces, the construction of shelters, and much more. It is heart-warming to the see the national and international solidarity that is taking place.

While communities in Iraq traditionally tend to only look after their own, the programs that are being put in place in collaboration with different countries is pushing these communities to open themselves up, pushing them towards internationally recognized humanitarian standards that are inclusive to all people in need.

We were 15-20 people from many countries during the three days of meetings and visits. It was clear that some things transcend cultural barriers: compassion is a universal trait. As a Syrian-Canadian working in the Middle East, I can see that in front of me. We will all, hand-in-hand, keep working with all the support we can give to bring hope to a region torn apart by wars and misery. We will do this because it is not about the number of people or about seeing the light at the end of the tunnel - it is about helping Soufian and thousands of others like him feel like they are not alone.