In Emergencies
July 11, 2014
by
Gilio Brunelli, Director of International Programs 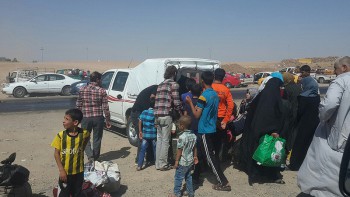 The recent offensive that was launched by the Islamic State in Iraq and the Levant (ISIS) throughout Iraq has caused the displacement of 1.2 million Iraqis, who are trying to escape violence and terror. Following attacks and retaliation by other groups, the situation is evolving by the day.

The largest concentration of displaced Iraqis are in Anbar, Dohuk, Erbil et Ninewa. After the onslaught by ISIS, these people fled, leaving nearly everything behind, and now they need food, water, shelter, medical aid, as well as other basic necessities. Sadly, however, the violence created by rebel groups, offensives and counter-offensives, as well as the weakness of the Iraqi state are causing major barriers for aid to be delivered, for rescues to be organized and for humanitarian aid organizations to function in general. The international community is still under shock by the collapse of the Iraqi army and government, and as a result has been slow to respond. In the meantime, the situation has not improved in any way for those displaced.

ISIS is a jihadi movement that was started in Iraq in 2003, following the dismantling of Saddam Hussein’s regime and the demobilization of his army by American forces. As the Committee on International Justice and Peace of the United States Conference of Catholic Bishops (USCCB) mention in a recently released statement, the American invasion and occupation of Iraq unleashed sectarianism and extremism in the country. ISIS, which is Sunni, wants to establish an Islamic state that would extend over parts of Iraq, Lebanon and Syria and that would be governed by Sharia law. Already active in Syria and often in conflict with other rebel groups there, ISIS was able to easily cross the border into Iraq and establish itself there by focusing on the growing dissatisfaction of the Sunni population with the Shiite government in place, from which it felt excluded and oppressed.

Above and beyond the humanitarian needs caused by this crisis, it has also brought to the surface historically deep divisions within Iraq that could lead to complete chaos in the country and have significant and catastrophic repercussions on the entire Middle East. These tensions date back to when Iraq was created through a division of the Middle East into countries by England and France after World War I, rather than through an historical process to build national identity. Since then, Iraq has been fraught with ethnic and religious tensions between three main groups: the Sunnis, the Shiites and the Kurds. Dictatorships have held the nation together through an iron fist rule until the fall of Saddam Hussein. Hopes to rebuild the country on the basis of citizen participation and democracy were lost when the current regime was put in place by the United States. Unfortunately, this regime, which is Shiite, has stuck to a policy of revenge and favouring its own religious group, with the disastrous results we have witnessed in the last few years, and opening the way for groups like ISIS to take hold.

Pope Francis launched an appeal for unity in the country, saying that he hoped the whole country could enjoy “security, peace and a future of reconciliation and justice, where all Iraqis, whatever their religion, could build their nation together, creating a model of coexistence.”

Development and Peace has been following the situation closely so that it can bring aid to the victims of the conflict. Despite the hostile environment, Caritas Iraq is already distributing food and other basic necessities to 2,000 families who are living in a makeshift camp in Dohuk. Development and Peace, which worked with Caritas Iraq after the last Gulf War, and has been working with other local organizations in the Middle East since the year 2000, continues to support peacebuilding activities throughout the region. We are working to consolidate good governance, develop citizen participation, support the establishment of good relations between various religious groups and to promote the respect of human rights for all, which are all necessary factors for citizens to live in peace, and in fact, they are at the very heart of the issues in Iraq and the entire region.