If all the oil in Alberta dried up today, what would you do? 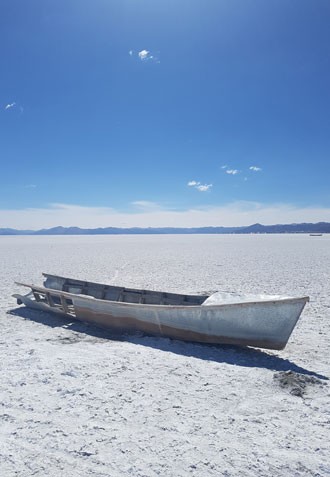 The Uru people that have depended on Lake Poopo for generations are now asking themselves a similar question. The lake, located in the Oruro province of Bolivia, experienced an unprecedented fast period of evaporation at the end of 2015. Within one month, the shoreline had decreased by fifteen kilometres. By December 8, 2015, it was official: the lake had dried up.

On August 16, 2017, our group had the opportunity to visit the Llapallapani community that once rested on the shore of Lake Poopo. We walked the ground where the water and fish that sustained the Indigenous Uru people once resided. The soil, caked in salt, cracked under our feet. The snow-like scene stretched to the horizon. Looking out, Dionicio Choque Mamani, the mayor of the Uru community, explained, “There [once] was water and fish. Now there is no work. We are discouraged.”

Without food or income from the lake, many residents of Llapallapani have left the community to seek employment. This decision has cultural consequences: “As Uru, we have always lived off fishing.” Self-described as one of the oldest living Indigenous groups in Bolivia, the Uru have much of their identity and territory tied to the area that once was Lake Poopo. With the lake dry and residents leaving, there seems to be a fear of losing an ancient culture.

This isn’t the first time Lake Poopo has disappeared. In 1992, the lake dried completely. As a shallow lake in an area with an evaporation rate that far exceeds its precipitation, this is not unexpected. Thankfully, after the rainy season, the body of water returned. This time, however, it has been nearly two years without much more than puddles collecting where metres of water once rested. Major re-routing of the river that feeds the lake for upstream mining operations and irrigation may be partially responsible, but analysis suggests that climate change is playing a role as well.

The people of Llapallapani are adapting. The community has appealed to local and national governments seeking support. This advocacy has been done in collaboration with CEPA (Centre for Ecology and Indigenous Peoples), one of Development and Peace’s partners in Bolivia. The process has been arduous, but not without results; the local government has worked with the community to build fishing farms in the area. The community is also working to farm the land, and use reeds and salt residue from the lake to create arts and crafts for selling. The latter approach further seeks to reproduce and sustain the Uru people’s culture and art while being an economically viable option.

The Uru people are still seeking to recover to such a dramatic loss, and their collaboration with CEPA has yielded results that are already effective. However, there is still much to be done to adapt to the loss of the lake and the possibility that it will never return. Choque says, “There is still hope.”

The Solidarity Tour Has Returned for 2020!
Read more

A personal reflection on the meaning of solidarity
Read more

The life of a miner
Read more

Witnessing “woman at the heart of change” in Bolivia
Read more