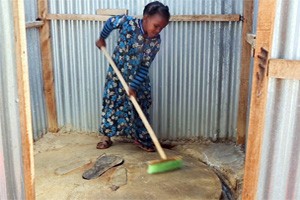 In situations where hygiene is poor and people have weak health, diarrhoea can be a killer disease. In fact, it’s the second cause of death of children under five worldwide. In 2011, when 20,000 Somali refugees suddenly arrived at the Kambioos refugee camp in Kenya after fleeing hunger and violence in their country, there weren’t many toilet facilities, and poor hygiene threatened many lives.

“There weren’t many toilets,” says Ahmed Hussein, who is a refugee at the camp. “Faeces were lying in the open and rubbish was everywhere. I remember several children dying and the young and old all had diarrhoea. I even thought that having diarrhoea was simply a part of refugee life.”

Today, Ahmed is a hygiene promoter in the camp, encouraging proper hygienic habits amongst his fellow refugees.

He received training thanks to a program put in place by Development and Peace and its partner Catholic Relief Services (CRS) to curb the spread of disease in the harsh desert conditions of the camp. Latrines were built and refugees, such as Ahmed, were trained in hygiene and hand-washing.

“Those who are most vulnerable, such as children, the elderly or those who haven’t eaten in five days, are more susceptible to disease. As such, many people develop diarrhoea, and some even die from it, unless hygiene in the camp is controlled,” says Dominique Godbout, Emergency Programs Officer at Development and Peace.

The two-year $8.8 million project, whose aim is to improve sanitation and hygiene in the camp, was funded by various members of the Caritas network, including Development and Peace, which contributed $250,000.  It has helped people in the camp to build latrines, provided them with cleaning supplies and raised awareness on the importance of proper hygiene for staying healthy.

Initiatives, such as “global hand-washing day,” which used role-playing and performance, were organized to get the message out. Hygiene promoters were also trained to help spread the word amongst the camp’s 20,000 residents.

Over 3,000 household latrines have been built and clean-up campaigns were held every month to ensure that rubbish didn’t build up. Dozens of solid waste managers also ensured that the camp didn’t become a dumping ground.

“Our health depends on our hygiene maintenance. Without awareness about cleanliness, there would have been a lot of deaths. Cholera would have become an epidemic. Thankfully, this has not happened, because of all the work that went into raising awareness about hygiene,” says Saruro Hussein, a resident of Kambioos.

During the summer of 2011, a drought in the Horn of Africa put millions of people at risk of famine. In response, Development and Peace launched an appeal that raised over $10 million for emergency relief efforts. Development and Peace has implemented projects focused on food security, community resilience, and conflict resolution. We are working in conjunction with local Caritas organizations in the region to incorporate development approaches with long-lasting impacts.