Human rights in Cambodia under threat

In News from our partners
June 13, 2012
by
Geneviève Talbot, Program Officer for Emergency Relief 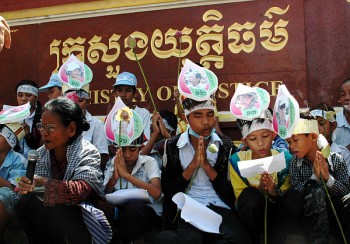 Several groups in Cambodia have mobilized to condemn the use of armed force against citizens who are speaking out in defense of their rights. In the last few weeks, a series of troubling events have led to this mass mobilization, including the arrest and mistreatment of 13 women who participated in a peaceful protest against land evictions. Over 120 organizations, including Development and Peace partners NGO Forum on Cambodia, Indigenous Community Support Organization, Banteay Srei and Licadho Canada, have signed a joint statement entitled The Culture of Impunity Must Stop, to condemn the May 22nd arrest of the women and other human rights violations in the country.

The women had gathered with other residents of Boeung Kak Lake, an evicted community close to Phnom Penh City, to sing songs about land rights in support of 18 families who are seeking to mark the boundaries of their demolished homes. The community has consistently requested that authorities complete demarcating the area, as stated in an August 2011 decree that grants residents 12.44 hectares of land. Over 600 families have since been granted land titles, including several of the women who were arrested, but many families are still waiting without answer as to when their land will be demarcated.

The situation of Venerable Loun Sovath, a Buddhist monk and prominent human rights defender in Cambodia, is also very worrisome. On March 2nd, Ven Sovath, who is the recipient of the prestigious Hellman-Hammett Award and a finalist for this year’s Martin Ennals Award for Human Rights Defenders, visited Development and Peace and described how respect for human rights was under threat in Cambodia. On May 24th at approximately 10 AM, authorities in civilian dress, and later backed by police, surrounded Ven Sovath in front of the Phnom Penh courthouse, forced him into a Land Cruiser, and drove away. He was held incommunicado at Botum Pagoda in Phnom Penh for 10 hours, and was only released after being forced to sign a document stating that he would no longer continue his advocacy efforts.

Many other violent incidents have taken place this year in Cambodia, most related to opposition to economic land concessions (ELCs) to large companies. On April 26th, environmental activist Chut Wutty was killed, as was 14-year-old Heng Chentha during a brutal forced eviction of a village on May 16th.  Three young women were also shot at while protesting for better working conditions.

According to the joint statement “These recent shootings took place despite the fact that Prime Minister Hun Sen has issued a directive prohibiting the use of firearms against protesters and a moratorium on the granting of ELCs.”

The signatories of the statement, as well as many international human rights organizations, are calling upon the government of Cambodia to respect and strengthen the rule of law, and break the current cycle of violence and impunity.

Cambodia: Development and Peace is deeply concerned by the bloody repression of a workers' demonstration in Phnom Penh
Read more
Advocating for Indigenous land rights in Cambodia
Read more