Honduras: “We are not stealing or begging – we are demanding what is rightfully ours.” 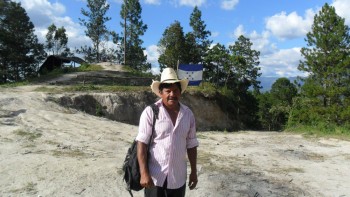 In Honduras’ mountainous southern department of La Paz, mornings are chilly and the altitude is ideal for coffee growing. Here, the dark-skinned indigenous Lenca people make up 80% of the population. Yet, from the poverty and the discrimination they endure, one might think they were a minority.

In this community, four out of ten children die before they reach the age of two from a poverty-related disease. Most of the girls become pregnant while still minors, and in the community of Santa Elena alone, eleven women died last year in childbirth.

The Lenca are smallholders, and they need land to grow food and to live. Last August, 90 Lenca, including men, women, the elderly and children, organized into the Indigenous Lenca Movement of La Paz (MILPA), when they decided to exercise the rights to land guaranteed in Honduran laws and international treaties. They had all been living precariously on tiny plots of land, surviving on odd jobs that paid about $2 USD a day.

They did not take this decision lightly. Development and Peace partner CEHPRODEC had lawyers help them research the situation and define their rights. They found that the land was “owned” by a local woman, the cousin of a National Party minister. This woman had done a deal with the mayor of Marcala in 2005, and acquired more land than she legally had the right to. The land had lain fallow since then.

The MILPA occupiers moved onto the land on August 22nd, 2012. They hoped to get the government to buy the land from the woman, offer them the land and a mortgage to slowly pay it off.

A few weeks later, the landowner’s father, a resident of nearby Comayagua, got drunk, and loaded up his pick-up with explosives, heavily armed guards, and swore to everyone he would “kill those good-for-nothing land thieves.” He had already made a list of the names of each person, and circulated it to the whole business community in Marcala, telling them to never offer jobs to these people.

As the angry man drove towards Marcala, police were warned he was on his way and stopped him at a roadblock. He was arrested and put in police cells. But he soon got out, reportedly after having paid half a million lempiras ($25,000 USD).

Fernando, who is the leader of the group, and the others are now waiting for the case to go through the courts. Because several of them did human rights training with CEHPRODEC, receiving diplomas, they know that ILO Treaty 169 on indigenous and tribal peoples, ratified by Honduras, gives them rights, and that the government is obliged to provide indigenous people with land. But most local judges have never heard of ILO 169. They also know that Honduran law gives them the right to occupy unused land.

“We are not stealing, nor are we begging,” says Fernando. “We are just demanding what is rightfully ours.”