Honduras: Protecting a precious water source threatened by a dam 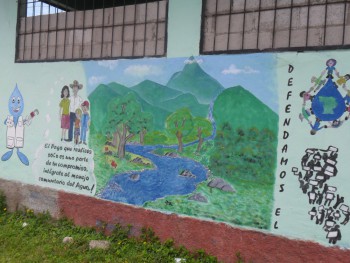 The small town of San Francisco is nestled between the blue cloud-wrapped mountains and verdant tropical forests of the Pico Bonito National Park, and the sultry fruit-producing plains of the northern Atlantic coast of Honduras. A former banana plantation that borders the park has been replaced by pineapples for export. It is a community where no one goes hungry – even the stray dogs and cats look well-fed – but healthcare is precarious and jobs are few. Many youth have migrated to the US in search of opportunities.

Now, the community faces the added risk of losing access to the few natural riches that sustain it, including the pure cool waters that flow down Mount Pico Bonito in abundance from the River Cuyamel springs. Adalid Mendoza, president of the municipal water board, has spent the last 10 years struggling to ensure that the residents of San Francisco do not lose that liquid gold to a World Bank funded hydro-electric dam. The Junta de Agua is a member of the Coalicion Nacional de Redes Nacionales, which is coordinated by CEHPRODEC, a partner of Development and Peace.

“We want that water to be our gift to future generations, it’s their right,” says Adalid, who has led the town’s dogged resistance to the Cuyamel II hydro-electric dam project. The dam is set to be built 5km upstream from the municipal tanks where the town’s drinking supply is stored. Despite the fact that the Cuyamel micro watershed is part of the national park and protected by a 2005 governmental decree, the government has been pushing the project since 2003. Shortly after the 2009 coup d’état, the de facto government decreed to annul the law that protects the Pico Bonito National Park, which will allow the project to move forward. Already, a new military detachment has been built next to the water source.

The members of the mostly voluntary water board, who are responsible for maintenance of the infrastructure that supplies the water, testing the water and collecting the 25 lempira ($1.25) monthly fee from the 1,100 subscribers, have left no stone unturned in defending this precious water source. They have persuaded their mayor to support them, and lobbied the population to defend their right to water. On numerous occasions they have been to the capital Tegucigalpa to meet with deputies in Congress and press for the cancellation of the environmental license for the project that was granted in January 2010.

In the face of this opposition, in 2011, the deputies for the department of Atlantida came to San Francisco, accompanied by the investors to try to win over the population. Only 8 residents, including Adalid Mendoza, were allowed into the meeting, but outside, a busload of supporters from neighbouring communities were there in solidarity, distributing leaflets and waving banners. And accompanied by environmental organizations, Mendoza and the water board have visited every single mayor in the department, calling on them to sign a pledge to refuse hydro-electric dam projects in the protected area. Only a minority signed and offered their full support, while the rest slammed the door in their face or only gave verbal support.

In Honduras, where violence is widespread, such open resistance to a project can be fatal, and CEHPROHDEC worries about Adalid’s vulnerability. However, this has not stopped him from speaking out.

“The struggle is increasingly intense,” says Adalid. “So far the government has not dared to go ahead with the project because of our mobilization.”

In Honduras, the CEHPRODEC calls for solidarity with the threatened Lenca people of Marcala
Read more
Honduras - Trade and Investment at the Expense of Human Rights
Read more