Honduras: Impunity for the murders of human and land rights defenders? 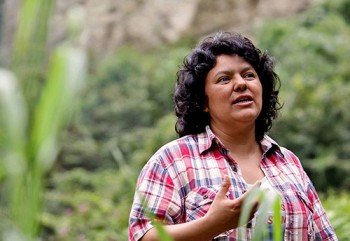 According to the organization Global Witness, more than 109 human and environmental rights defenders were killed in Honduras between 2010 and 2015. Only eight of these murders were publicly reported, and of these, six were members of Indigenous communities. As is stated by Global Witness, this is just the tip of the iceberg since so many cases go unreported.

Recent events in Honduras only further confirm the disconcerting threats to the lives of those who defend human and land rights. Barely two weeks after the brutal murder of Berta Cáceres, another leader of the Civic Council of Popular and Indigenous Organizations of Honduras (COPINH), Nelson Garcia, was assassinated. This killing took place despite the international focus on the human rights violations taking place in Honduras.

In his statement following the assassination of Berta Cáceres, Cardinal Turkson, President of the Pontifical Council for Justice and Peace, denounced the criminalization of those who are fighting for a more just world, seeking dignity, and who are simply striving for a roof over their head, work to support their family, and land on which to live and grow their food. The Cardinal has added his voice to the more than 120 national and regional organizations in Canada that are calling for an independent and international inquiry into the assassination of Berta Caceres Flores.

Why are the lives of human and environmental rights defenders so threatened in Honduras?

Added to the murders of Berta Cáceres and Nelson Garcia are the threats and climate of terror that our Honduran partners must work in, particularly CEHPRODEC and the Fundación ERIC. These threats and assassinations are aimed at those who oppose the development model that is imposed by the corporate and government elites of Honduras. This model, which some of our partners refer to as an “extractive” model, is based on the unfettered exploitation of natural resources and which, all too often, has negative impacts on local populations living on those lands.

Berta Cáceres was internationally recognized for her opposition to the construction of the Agua Zarca dam, one of the largest hydroelectric projects in Central America that is to be built on the territory of the Lenca people in the northwest of the country. The Lenca are one of eight Indigenous peoples in Honduras, and one of the poorest groups in the country.  Founded in 2008, the Honduran company DESA (Desarrollos Energéticos Sociedad Anonima) holds the contract to construct the hydroelectric plant. International funders of the project include the Banque interaméricaine d’intégration économique (Banco Centroamericano de Integración Económica, BCIE), FINNFUND (Finnish Fund for Industrial Cooperation,) and FMO (Netherlands Development Finance Company), who have all suspended their financial assistance in response to the assassinations of Berta Cáceres and Nelson García.

These hydroelectric dam projects are often perceived as being "green" and part of the sustainable development of countries. It would seem on the surface that the social and environmental costs associated with building these large dams is justified since they produce and distribute renewable energy. However, while it is true that the vast majority of energy sources in Honduras are not renewable, it should be pointed out that the carbon dioxide emission rate per capita in Honduras is 1.1 metric tons, i.e. 13 times less than that of a Canadian. Despite this small contribution to climatic change, Honduras, Burma and Haiti were the countries most affected by extreme weather events between 1993 and 2014.

Good use of climate funds in Honduras would dictate that we support projects that allow communities to adapt to climate change rather than projects for reducing the country’s already minimal greenhouse gas emissions.

And Canada in all of this?

Canada is actively involved in the "extractive" development model taking root in Honduras, despite the opposition of Indigenous peoples and peasant communities The Canadian Embassy and the former Canadian International Development Agency (CIDA) were involved in the 2013 adoption of a new mining code that facilitates the operations of foreign companies in Honduras. Furthermore, in 2014, the Canada-Honduras Free Trade Agreement came into effect, and in 2015, a report on human rights violations in Honduras was submitted to the Subcommittee on International Human Rights of the Standing Committee on Foreign Affairs and International Development. This report, although imperfect, clearly illustrates the link between human rights violations and this model of development. Canada can no longer ignore the dangerously tense situation around natural resources in Honduras.

In this context, Development and Peace has joined forces with hundreds of Canadian organizations calling upon the Government of Canada to continue to publicly pressure and use all resources at its disposal to convince Honduran authorities to:

Considering Canada's role in the Honduran economy, Development and Peace calls upon the Government of Canada to: