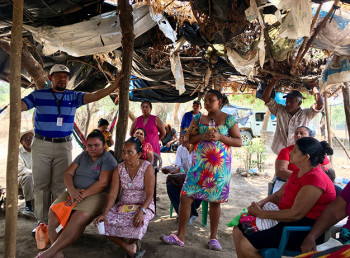 Development and Peace has been working for 20 years now in partnership with Caritas Choluteca in southern Honduras.  Our current collaboration with this diocesan Caritas seeks to empower local communities to defend their environment and natural resources.

It’s 30C in the shade and the population of Los Prados, Namasigüe, has gathered in the makeshift wooden, straw-roofed resistance camp it has erected next to an arid, yellow grassed field.  Women, already beaded in sweat at 10 a.m., fan themselves with paper fans, and nearby, fat iguanas bask in the sun.   In the shelter, nylon hammocks are strung up between the wooden poles and tattered plastic bin liners flutter in the breeze.

“No one has ever come here to explain anything or give us any information about the project,” says local councillor Leonardo Amador Rodriguez of the imminent installation of 134,000 solar panels on the neighbouring field.   Will the solar panels raise the already stifling temperatures?   In an area that is prone to droughts, how will it affect the water supply?  How will the people find new protein sources when the rabbits and iguanas they usually hunt here are chased away by pre project deforestation?  Who will clear away the solar panels when they become obsolete after 20 years?

Among the many unanswered questions, there is one certainty: energy generated by the solar panels is not for the people of Los Prados, it is for the national electricity grid and may even be exported to other Central American countries.

“We are opposed to this project that threatens our health, and that of our grandchildren,” says Rodriguez of the mega-project, which is being funded by Norwegian capital and the Central American Development Bank and is projected to make annual profits of $15 million USD.  The project, one of 32 solar energy projects currently underway in Honduras, is part of the government’s plan to gradually reduce the country’s dependence on energy powered by fossil fuels by increasing clean energy, a transition supported by international climate funds.  The southern region of Choluteca, known as the Dry Corridor for its abundant sun, with mean daily temperatures of 36C,  and harsh droughts, has attracted the majority of the new solar energy plants.  But this region is also home to the internationally recognized wetlands of the Gulf of Fonseca, which are in theory protected by international treaties.

To protest the project, two years ago, the community put up a peaceful resistance camp.  But according to Energias Solares, a member of the five company conglomerate of shareholders, they are violent agitators, and 32 people now face legal charges of obstruction.   Those accused include several women and Erasmo de Jesus Pastrana, a man in his sixties, who was struck across the face by an armed company security guard.  Pastrana currently has a detention order against him and cannot leave the community for fear of arrest.

The accused are defended by lawyers working with partner Caritas Choluteca.  They have managed to avoid prison by agreeing to travel to Choluteca to sign court papers at least once a week.  Most of those charged don’t have the money to pay the $11 bus fare to make the trip to the court, and those who work and can pay the fare don’t have the time to make the weekly 12-hour round trip. 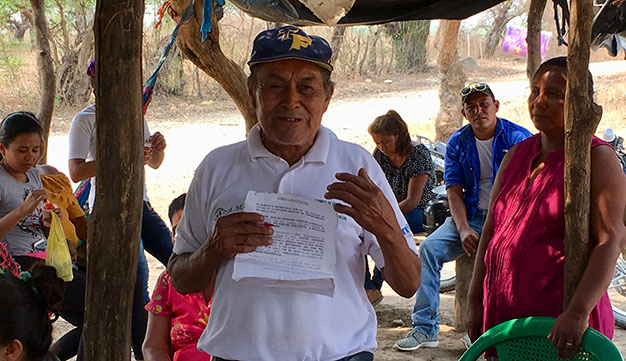 The case illustrates a worrying global trend, highlighted by the United Nations and international human rights organizations, of the criminalization of defenders of human rights and the environment, and the increasing dangers facing those who oppose mega-projects on their land.

Honduras’ handling of the transition to clean energy paints a gloomy socio-political portrait of the state of affairs in the Central American country. Laws put in place after Hurricane Mitch to create incentives for private sector participation in energy production have drawn eager investors from a clique of the local elite business class seeking financial opportunity.  After the 2009 coup d’état, laws banning energy projects in environmentally protected areas were rolled back and open season on energy investments was declared.

Local organizations have decried the lack of transparency surrounding the energy concessions, with no bidding process and no public environmental impact assessments.  And two of the major investors in the nine solar plants in the Choluteca region are persona non grata, as far as local communities are concerned. One is Roberto David Castillo Mejia, a major shareholder in Energias Solares SA who is in prison on charges of organizing the 2016 murder of environmentalist Berta Caceres and for money laundering, and the other is Orlando Pinto, a major shareholder in the three concessions in Los Prados who is serving a prison sentence for drug trafficking and money laundering.

Yet, despite the murder of Berta Caceres and other leaders for resistance to hydro electric projects, the international community continues to support Honduras’ transition to clean energy, and to date has imposed no real conditions regarding the prior and informed consent of affected communities.  Currently, almost 43% of energy in Honduras is produced by fossil fuels, 28% is produced by hydro-electric power, and the rest by a mixture of bio mass, wind power and solar.   Nonetheless, Honduras’ carbon footprint is relatively low: it produces only 1.1 metric tonnes of greenhouse gases per capita (compared to Canada’s footprint of 15.1 metric tonnes per capita.)   Development and Peace partner CEHPRODEC has pointed out that the main shareholders in both fossil fuel and clean energy projects are the same members of an elite minority, and that the rush to invest in clean energy must be understood as an effort to break into new markets rather than lower greenhouse gas emissions.[1]

Communities such as Los Prados who oppose clean energy projects generally generate less sympathy than communities opposed to environmentally damaging mining projects.  Yet Development and Peace sees in the imposition of these lucrative concessions a clear pattern of strengthening the economic elite of Honduras and injustices against and exclusion of very poor rural communities.

Santos Baca on the left, animator of Caritas

“No one is disputing that clean energy is a good thing for Honduras, but it has to be done properly.  People have to be consulted and offered jobs or compensation for their land; proper environmental impact studies have to be done and communities need to be informed,“ says Danilo Puerto Ocampo, director of Caritas Choluteca.

As Leonardo Amador Rodriguez puts it:  “We are not against the production of energy, but we are opposed to a system that doesn’t include us.”