Honduras: Development and Peace supports the women of the Siria Valley on International Women's Day 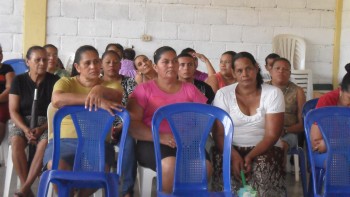 It has now been two years since the suited managers of the San Martin open pit gold mine, owned by Goldcorp, packed their bags and left the Siria Valley in central Honduras. They had spent literally hundreds of hours of air time, reassuring the population that the mine hadn’t harmed the surrounding environment.

As proof, they even built an eco-tourism hotel on the mine site, raised cattle and poultry and planted eucalyptus trees everywhere – although the thirsty nature of these in an area with a gradually diminishing water supply seemed to escape them.

But something is not right here. Where the sulphurs produced by the heep-leaching process, which uses cyanide, used to trickle down the mountain into the gullies, the grass and weeds are brown, parched and crisp. On the other side of the road, however, which was unaffected by the mine, the panorama is a verdant pasture with abundant vegetation. And when the rains are heavy, there is a strange, strong sulphurous smell that enters the air.

Ana Zuniga can feel it in her bones that something is not right. Or perhaps, more in her blood. Working with Development and Peace partner Caritas Tegucigalpa, Ana was one of 40 people tested by the Honduran government for heavy metal presence in the blood. For several years now, Ana complains to have suffered from patches on her skin, chronic headaches and loss of memory.

The people of El Porvenir and El Pedernal are not used to being treated like citizens by their government. But the injustice of the unannounced arrival of a mining company on their land, roused this rural population from a slumber encouraged by the government in rural Honduras.

It was back in October 2007, that Caritas Tegucigalpa managed to get the Honduran health ministry and the agency for the control of pollutants to work with them to take blood samples of 40 residents of the area around the San Martin open pit mine, and test for heavy metal presence in the blood. Samples were then sent to Colombia, where they were tested in a laboratory.

When the results were returned in a manila envelope, in the midst of persistent campaigning by the community about the San Martin mine and its alleged ill effects on the health of the population and the environment, they were relegated to a drawer in government offices. No one could get the government to reveal anything.

But the cat was let out of the bag in February 2011, when a cabinet reshuffle led a government minister to decide he had nothing to lose and released the results of the tests: Ana and almost all the others discovered they had mercury and arsenic levels more than 700 times the acceptable levels in their blood. Those most seriously affected are women. It is believed it is because women come into contact more with water while performing domestic tasks. In the long term, heavy metal presence can cause nervous diseases and certain cancers.

“Why did the government keep the results to itself for four years, denying those affected the chance to seek medical treatment?” asks CEHPRODEC lawyer Donald Hernandez. Most of the affected do not seem overly surprised that their government has once again failed to treat them with the respect due to citizens. CEHPRODEC has filed recourse with the Ministry of Health, calling on it to immediately test for current levels and provide the appropriate medical attention.

But they know that a lawyer’s demand is not enough: it will require the mobilization of the population, who will have to take to the streets to demand justice. In the wake of a new mining law approved last week and which will bring new mines to the area, the women of el Porvenir and Pedernales plan to spend time visiting other communities to warn the residents of what might be the high price to pay.