In the aftermath of Hurricane Matthew, several of Development and Peace – Caritas Canada’s partners have reported that preventative measures learned from past disasters helped saved lives. Authorities and civil society organizations, including community radios funded by Development and Peace, efficiently raised awareness in the hours before Matthew hit land, and in many areas, evacuated citizens from areas at risk, significantly reducing loss of life.

In Gressier, where Development and Peace collaborated in the construction of more than 500 houses with its partner ITECA after the 2010 earthquake, only one rooftop was torn off. Inhabitants report that despite winds of more than 200 km/hour their houses only suffered minor damage due to the high quality of the construction techniques and materials used. ITECA, as well as the women’s organization Fanm Deside in Jacmel, also managed to protect hen houses that were built as part of social enterprises that they launched with support from Development and Peace. 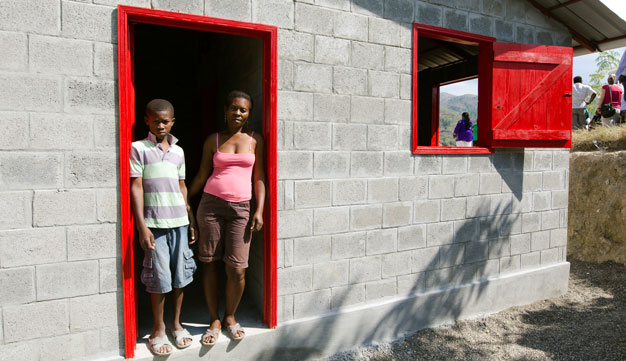 More than 500 houses in Gressier built by Development and Peace and its partner ITECA suffered only minor damage thanks to high-quality construction techniques and materials used. Photo 2015

However, despite this encouraging news, it is clear that the hurricane has had devastating impacts on local agricultural production. Most of the nurseries put in place by Fanm Deside to produce vegetables for female-headed households have been wiped out, leaving the women and their families facing hunger. They also lost livestock, mainly goats.

“These women were poor but were able to just about get by with a source of food production,” reported Marie-Ange Noel, member of Fanm Deside’s executive committee, by phone. “They now have nothing and are facing hunger.” She added that many of those taking shelter in Jacmel School lost their houses, which, although precarious shacks before the hurricane, were the only shelter they had, and now they find themselves homeless.

In Dame Marie in the department of Grand’Anse, an agricultural cooperative supported by Development and Peace as part of its reconstruction program, was severely hit and a cocoa beans processing plant has been destroyed. At Baie de Henne in the Nord Ouest department, grain warehouses and cereal mills were essentially wipes away. A goat-raisng project, as well as peasant gardens were also destroyed.

For ITECA, which specializes in training and support to Haitian peasants, the situation is similar. Crops have been ruined, livestock swept away and footpaths used by small farmers destroyed. ITECA’s team is helping the government in assessing the damage.

Communications remain difficult in the departments of Grand’Anse and Sud, where roads are blocked by fallen trees and some have large holes caused by the heavy rains. Mobile phone signals are slowly being restored, but in many cases people have no electricity to recharge their phones. Fourteen community radio stations in Grande Anse, Sud, Ouest and Nord Ouest that are members of the radio network SAKS, which is supported by Development and Peace, have been damaged by the hurricane. This has left public information to be provided by commercial radio stations, which prioritize the interests of their sponsors. 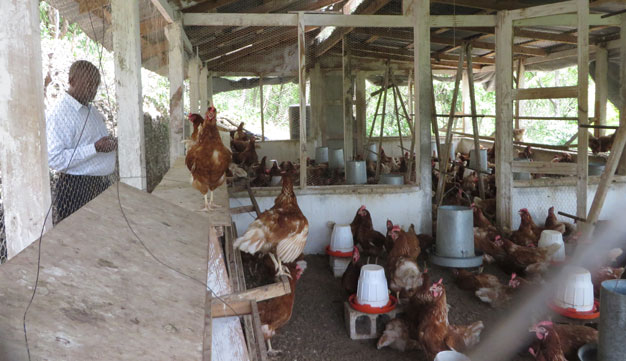 Local organizations ITECA and Fanm Deside managed to protect hen houses that were built as part of social enterprises that they launched with support from Development and Peace. Photo 2013.

Development and Peace is working with Caritas Haiti to provide emergency relief to people affected by the hurricane.  It will also continue to work with its local partner organizations to assess the damages left by Matthew with a focus on sowing new crops, re-launching agricultural production and reforesting areas prone to erosion. In an effort to reduce the vulnerability of Haitians to such disasters, Development and Peace has put in place a $50,000 fund that its partners can meet the urget needs of the communities they serve.

As part of its programming in Haiti, Development and Peace believes in the long term viability of small-scale agriculture as an environmentally-sustainable solution of tackling hunger in the country. Haiti has a very low carbon footprint yet is one of the most vulnerable countries to climate change, as seen with this storm. Unusually warm waters in the Caribbean, caused by rising temperatures, were at least partly responsible for the force of Hurricane Matthew.

As we prepare to face the damage wrought by Matthew, we welcome Canada’s recent ratification of the Paris Accord, which provides for a 30 per cent reduction in greenhouse gas emissions by 2030, and will contribute to reducing the risk of increased extreme weather phenomena such as Matthew.

The quality of the development and reconstruction work that was undertaken by Development and Peace and its Haitian partners following the 2010 earthquake speaks for itself. Development and Peace remains committed to working on the ground in Haiti with local organizations that are providing relief and working to reduce the vulnerability of Haitians to disasters.  In the words of ITECA director Chenet Jean-Baptiste: “Ayisyen se poto-mitan rekonstriksyon – Haitians are the cornerstone of reconstruction.”

Development and Peace is accepting donations to support their efforts,
and calls on the Canadian public’s generosity.