A green recovery: “We know we are capable”

In Advocacy, Blog, Members in action
December 11, 2020
by
Hélène Tremblay-Boyko, Development and Peace member from Saskatchewan 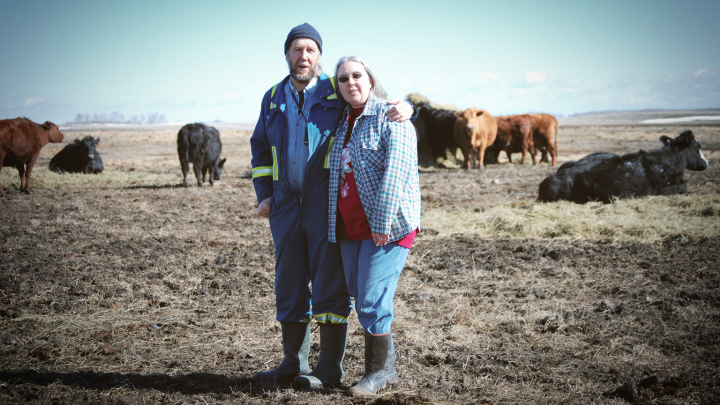 Hélène and her husband, Al Boyko, practice agroecology on their Saskatchewan farm.

Eventually, I integrated fall and Share Lent campaigns into my classrooms. I was particularly engaged when Development and Peace began environmental advocacy as a means of improving the lives of the poorest and most vulnerable people in the Global South. As I have come to understand it, “the cry of the earth and the cry of the poor,” that Pope Francis speaks of in Laudato Si’, are one and the same.

I grew up embracing nature in the boreal forest. My adult life as a farmer has intimately connected me to the environment and the increasingly changing and chaotic climate.

As my engagement with Development and Peace matured, I began seeing myself as a veteran of the cause. After serving six years on the National Council and being involved at many levels, I have learnt a great deal about our work in the Global South. In 2015, I was blessed to have been asked to join our delegation to take part in the civil society activities at the COP 21 summit in Paris.

Over several days, we participated in workshops and seminars with other like-minded organizations from across Europe and with partners from the Global South. These gatherings deepened my sense of urgency regarding the climate crisis.

Three young poets from Pacific Island nations exhorted us, with gut-wrenching, powerful words, to keep the global temperature rise below 2 degrees Celsius, so that their homelands would not drown. Their voices and the images they conjured still haunt me. They galvanized my commitment to integrating that experience into my work and activism.

For a farmer like me, the obvious sphere in which to advance climate justice is in agriculture. I had heard of agroecology at the Paris conference. I have since educated myself on it, adopted its practices and further investigated the carbon-sequestering potential of regenerative agriculture. At the 2016 World Social Forum in Montreal, I was honoured to be a panelist on agroecology.

On this fifth anniversary of the Paris summit, I am ever more concerned at the apparent lack of care, not only among my neighbour farmers, but also at all levels of government: municipal, provincial, and federal. I am dismayed that the bright idealism of 2015 has dimmed and almost disappeared from the radar. We cannot hold oil pipelines on one hand and climate justice in the other.

It is time to put both hands as well as our shoulders behind real climate action. During this pandemic, we have seen Canada and the world pivot with great speed. We know we are capable. We just need the will for a green recovery animated by an authentic care for our common home.