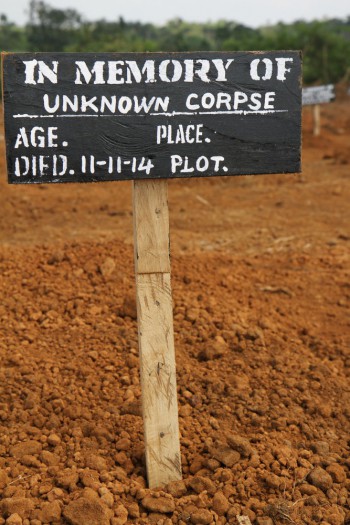 Sierra Leone currently has the highest incidence of Ebola, with over 7,786 infections and 2,696 confirmed deaths (as of January 14, 2015). Beyond the immediate health crisis, there have also been concerns raised pertaining to the long term socio-economic impacts of the disease. These concerns include the economy, the social fabric, food security and agricultural production (due to loss of human capital).

Although the international community is seeking ways to provide humanitarian aid to meet these immediate needs, greater attention and assistance must also be given to a much deeper issue: democratic development.

Development and Peace has been working to address this issue with its Sierra Leonean partner, Network Movement for Justice and Development (NMJD), for many years. According to Abu Brima, the executive director of the NMJD, obstacles relating to containing and treating the Ebola epidemic are largely due to the fact that democracy is not firmly rooted in the country. As a consequence, there has been a lack of prioritization of the health and education sector, as well as a democratic disconnect between citizens and the government, all of which contribute to the spread of Ebola.

The reason for this, according to Mr. Brima, is that after the civil war there was little attention or resources invested in building a sound democratic culture, or infrastructure to build on human capacity or human capital. For instance, there are few hospitals, doctors or health workers in the country, and inadequate equipment. As a result, people are dying of preventable diseases, such as malaria, typhoid and basic food deficiencies, due to limited access to health care.

In addition, the lack of structure and health care facilities means that when people fall ill, it is their relatives who must care for them at home, which also puts them at risk of contracting the disease. Because symptoms experienced by Ebola patients are similar to those of typhoid, cholera or malaria, it is hard for citizens to identify the disease, or to even believe that such a disease exists.

Furthermore, the lack of prioritization of the education sector has left over 50% of the population illiterate. Mr. Brima said, that this has also impacted the population’s ability to cope, making it difficult to understand the complexity of this disease and communicate containment measures.

Although the government enacted some by-laws to discourage contact, as a means of containing the disease, they proved to be ineffective. This was largely due to the absence of citizen involvement in developing policies, the ineffective communication on the part of the government to citizens across the country about these by-laws, as well as the lack of awareness and understanding of the disease.

“They did not involve the people, so people find it difficult to adhere to these laws. And some of these laws have not been communicated to everyone concerned so some people don’t know about it,” said Mr. Brima.

The strain that Ebola has placed on the economy of Sierra Leone has generated fears that the Sierra Leonean government will give up more arable land for farming and mining projects, in order to create a more investor-friendly environment.

According the Mr. Brima this would only result in further human rights violations. “In this process, citizens are losing their livelihoods by losing their land, and their rights are not being respected. A lot of time they need to be relocated from their original place of settlement for these projects.”

In order to protect economic interests, the government may allow companies to get away with these abuses, and not put defending the rights of citizens first. “We yearn for a society that is just, equitable and protective of its citizens,”says Mr. Brima. He stressed that creating a fair and just society would easily facilitate a sustainable development agenda for its citizens.

NMJD’s activities for developing democracy in the country are crucial, particularly in light of the current Ebola crisis, as they contribute to building the foundation for long-term democracy. Development and Peace’s support of this work allows NMJD to engage governments, citizens and civil society.

“Civil society needs to organize communities and indigenous people. It needs to educate them about their rights, their responsibilities and obligations of those mining companies, of governments and create an opportunity for them to gain their confidence, assert themselves and stand up and defend their rights,” said Mr. Brima, while explaining the importance of their work.

According to Mr. Brima, “Development and Peace has always given us a lot of input, questions, and been critical of our work. But critical in a supportive way to assist us in what we are doing.” He added that Development and Peace also contributes to developing content, provides capacity building and supports other civil society groups, who are working closely with NMJD.

For Mr. Brima, Development and Peace’s long-term commitment to the work of NJMD is significant, and its importance is highlighted at a time like that of the current Ebola crisis, when the impacts of weak governance are felt, and there are risks that gains made will be eroded. “We must continue to engage the country’s leadership to have a culture of respect for human dignity, and involve citizens in development processes. It is a long-term project that requires committed civil society networks, groups and coalitions and citizens who are organized, and the support of Development and Peace allows us to do that.”