Food and justice: building a wave of change 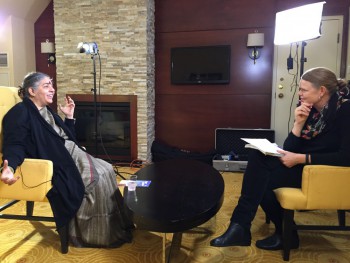 Food growers, food activists, food academics, and food policymakers came together at the 8th annual Food Secure Canada Global Assembly, Waves of Change: Sustainable Food for All, in Halifax to share experiences, research, and strategies on the best ways to ensure that people across Canada and around the world will be able to feed themselves. The focus was on how to produce healthy, nutritious food in a sustainable way, so that we will be able to continue to feed ourselves into the future.

One message from the Assembly was very clear: food is vital and key to achieving a just world. Some went even further, calling food sacred, and denouncing that food has been turned into a commodity that is gambled on the stock market for profit. Without food, we can’t live, and we certainly can’t thrive. But how can we transform our thinking about food into one where we honour it as the life-giving force that it is? How can we re-build our food system into a model that ensures that food is affordable and healthy for everyone, and so that it respects the land and water where it is grown and raised? The urgency of this issue was evident at the Assembly. As Canadian farmer Joan Brady, a member of the National Farmers’ Union, said, "When farmers are hungry, you know something is wrong with the food system.”

The atmosphere at the Assembly was electric. At the centre of the buzz was feminist seed advocate and scientist Dr. Vandana Shiva, whose attendance was co-sponsored by Development and Peace. Her inspiring keynote address and presentations at various workshops re-energized the people in attendance. Her evidence-based policy proposals are grounded in her extensive knowledge of seeds and the role of farmers in preserving seed biodiversity. She sees seeds as fundamental to life, and absolutely loved our fall campaign slogan Sow Much Love, mentioning it numerous times in her presentations. She used it to evoke the spiritual aspect of planting seeds and farming, when it can be done with dignity, respect, and love.

Leading water advocate Maude Barlow was also in attendance, and sounded the alarm on the global water crisis, by insisting that industrial farming methods are using so much water that aquifers and rivers are going dry. This, combined with climate change, does not bode well for the future of our food. Without enough water on our planet, we certainly can’t grow food.

Global justice advocates from the Canadian Foodgrains Bank, USC Canada, and Inter Pares, who are working along with Development and Peace on the issues facing poor farmers in the Global South, shared their experience and strategies for supporting small family farmers in Latin America, Africa, and Asia.

Organic farmers from the National Farmers’ Union mingled with community leaders who are innovating to create food sharing programs that go beyond the charity model of food banks. Many food advocates are frustrated that Canada still does not have a national school lunch strategy that ensures that Canadian school children are guaranteed at least one healthy meal per day. Indigenous community members and leaders lamented the lack of access to healthy food in Canada’s North, and advocated a return to wild foods and foraging, as well as innovative agricultural methods which make growing food possible in the Arctic.

Many of the people gathered at the Assembly want structural change so that there is a democratic and dignified model of eating, where people have food that is nutritious, adequate, affordable, and culturally appropriate. We heard statistics about hungry farmers, hungry children, and health crises related to both malnourishment and obesity. We also heard about the impact of industrialization and commercialization of farming on the environment, on the health of the people who eat the food, as well as on the health of the farmers and farm workers who produce the food.

Strategies on how to create a more equitable and sustainable food system were proposed, many of which are presented in the Food Secure Canada policy document Resetting the Table - A People's Food Policy for Canada , which is the result of a national consultation on how to improve both Canadian and international food policies, and is based on the food sovereignty approach.

With so many people committed to food sovereignty at the Assembly, I could feel that a wave of change is coming about how we eat and the food we eat. As Diana Bronson, FSC Executive Director, said many times at the conference: “The Canadian public is with us.” With a federal election coming up within a year, Food Secure Canada members are certainly going to be keeping food issues on the table.

An advent of hope: The story of Victoria Filibus
Read more