In Emergencies, Field visits
May 15, 2012
by
Geneviève Talbot, Program Officer for Emergency Relief 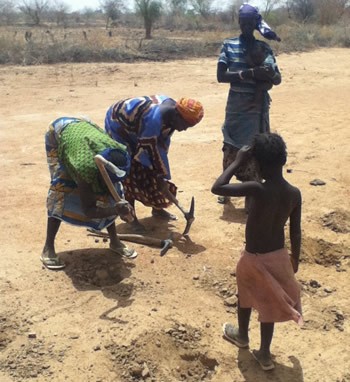 Geneviève recently travelled to Burkina Faso to meet with Caritas Burkina Faso (OCADES) and the Canadian Foodgrains Bank (CFGB), who are collaborating on a food distribution project with Development and Peace in response to growing food insecurity in the country. Here she writes about her experience in the field.

I have arrived in Burkina. It was more or less of a chaotic arrival! I was meant to fly to Bamako, Mali, to later travel to Ouagadougou in Burkina Faso, but the situation being what it is, the flight to Bamako was cancelled and I landed directly in Ouaga. Fortunately, our partner OCADES knew what to do and I found myself in good hands! They came to get me and brought me to meet Ary, the consultant from the CFGB, who also had to make last-minute changes to his itinerary. But I suppose that is the nature of emergencies, where you have to be on your toes at all times to deal with the unexpected. Ouaga is a city built on red earth, the air is hot and dry here and the people are bustling about. However, we don’t seem to feel any food insecurity here, particularly with the markets in full swing and food in plain sight. I am looking forward to meeting with the team at OCADES to learn more about the realities.

After being warmly received at the airport, I am now with Abbot Isidore, who has orgnized my schedule with OCADES. Our first meeting is to discuss the food distribution project. Ary and I have met with the team at OCADES who will be putting this emergency project into place. The team consists of five people: Mrs. Rita Zoungrana, Head of the Department of Solidarity and Distribution (the department that looks after emergency aid), Mr. Désiré Somé, Emergency Program Officer, Mr. Flavien Bationo, Communications Officer and, of course, the Head of Finance and the accountant who will be looking after the finances for the project. They are an important team, as this is a substantial project. It involves the distribution of food to 2,110 households in 10 dioceses over four months. In weight, this project represents 422 tonnes of maize, 422 tonnes of rice, 42,200 litres of oil and 142 tonnes of beans, which will reach 12,660 people. It’s a huge endeavour!

Launching the call for tenders

The rhythm of emergencies is fast-paced and our days are very busy. We must quickly get organized so that the call for tenders can be launched by May 4th, we have meetings with the World Food Program, Catholic Relief Services and other potential suppliers, and we need to finalize the quantity of maize, rice, oil and legumes for each diocese. All of this may appear simple, but in fact, it requires a lot of information and coordination by OCADES, which, like most Caritas offices, works in a highly decentralized way. We needed to reach all the participating dioceses to get the necessary information, which took two days of non-stop work. But on Friday, May 4th, we managed to launch the call for tenders! This meant contacting 10 potential suppliers to inform them of our offer. They had until May 11th to submit a final proposal, at which time we then proceeded with the opening of the bids. 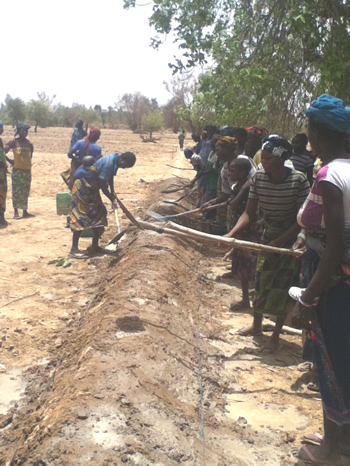 In order to fully grasp the situation on the ground, I asked OCADES to organize two field visits. The first was in the diocese of Manga, where I visited two villages, one which had received a hydraulic pump and another where community gardens built around a dam were organized for 100 households. The other visit was to the diocese of Kaya, where women practice "zaïr", a Burkinabé farming technique that consists of digging small holes in extremely dry soil to plant seeds which are then covered in compost. When the rains come, the seed will sprout and benefit from fertile earth. I also visited a project that consisted of the construction of small barriers in gullies that allow for the cultivation of rice.  The success of these projects will depend on the rains. In fact, everything here depends on rain.

"The last time it rained here was September 22nd, 2011," recalled Mr. Zobra, the parish priest. "This lack of water, in addition to the poor harvests from last year, is contributing to the food insecurity of the people who live here." 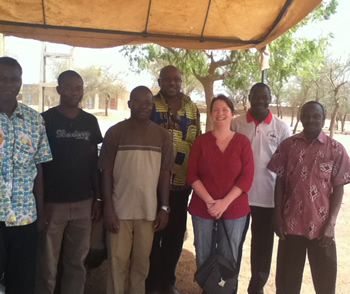