Filipino community in solidarity with victims of Tropical Storm Washi 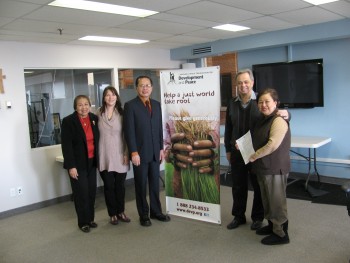 The Filipino community is very active and a source of inspiration…

It was with these words that Michael Casey, Executive Director of Development and Peace, opened a meeting yesterday with two representatives of the Federation of Filipino-Canadian Associations of Quebec (FFCA).

They came to the Montreal Office of Development and Peace by invitation of the Executive Director, who personally thanked them for raising $6,500 for humanitarian aid in the Philippines after Tropical Storm Washi (Sendong) caused flood damage in the southern region of the country last December. This amount was added to the $85,000 that was collected by Development and Peace for this emergency.

Genevieve Talbot, an Emergency programs officer at Development and Peace, took the opportunity to provide an update on the situation three months after the disaster. There are 34 evacuation centres that are still operating as land needs to be found to rebuild housing for many displaced people. The partners of Development and Peace, including NASSA (Caritas Philippines), RDRRAC, AADC and Maradeca, are working on the reconstruction of shelters, distribution of food and other staples, treatment for trauma, purification of water and means of subsistence for people. It should be mentioned that Fr. Edwin Gariguez, Secretary General of NASSA, will be giving presentations in the Maritimes as part of Development and Peace’s Share Lent campaign.

The representatives of the FFCA were pleased to hear how funds were being used. As they left, they expressed their intention to continue supporting Development and Peace by telling members of their community about the organization and spreading the word. As mentioned by Michael Casey, this fundraising effort is a source of inspiration and a great example of how Development and Peace is becoming better known!