The Ebola virus, a revealing indicator of a sad reality 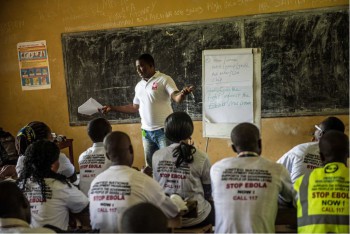 The Ebola epidemic currently raging in Guinea, Sierra Leone and Liberia is the largest, longest and most complex ever known. Its scope and exponential growth go beyond the highly lethal nature of the virus itself and are explained by the negative effects of poverty and inequality.

According to the World Health Organization (WHO), the exploitation of mineral and forest resources in the region has reduced the habitat for wildlife, with the impact that wild animals, who are the virus' natural carriers, are moving closer to places of human habitation, which in turn increases the risks of contamination. In this way, it is believed that the Ebola virus appeared in Guinea in early 2014, in Guéckédou Prefecture, an area at the crossroads of three countries, where there is a very high rate of mobility due to historical links between communities across borders.

The countries affected by this current crisis are some of the poorest in the world and the economic situation forces much of the population to be in constant motion for daily subsistence. Constant travel across porous borders—whether related to trade, employment, hunting, health services or family ties—is difficult to control. This explains both the spread of the virus to other countries and its reintroduction in places where it had finally seemed to be under control. The magnitude of the epidemic is also due to its penetration into urban slums where living conditions are precarious.

The difficulty experienced in establishing control over the Ebola virus is also indicative of the state of the healthcare systems in the affected countries. There is a lack of medical personnel, structures, ambulances, laboratories, epidemiological analysts and medical specialists. Countries like Sierra Leone and Liberia, which have just emerged from civil wars, have invested primarily in security rather than education or health. Whereas the cases detected in Senegal and Nigeria were quickly contained, the other countries are still battling them.

The collapse of the health system suggests a crisis that was underestimated. The number of deaths and cases has been called into question because not all cases and deaths have been reported for fear of stigmatization. There is also a lack of resources for screening and diagnosis, and the WHO statistics come from three different health ministries, all suffering from staff shortages.

The virulent nature and lack of awareness of the disease has rattled the population into a frenzy of fear that is fed by rumours, and where the population oscillates between denial of the illness and hostility against health workers dehumanized by their protective equipment and seen as the spreaders of the disease.

Little educated, weaker and terrified, physically and mentally broken, manipulated by rumours, the population oscillates between denial of the illness and hostility against health workers dehumanized by their protective equipment and seen as the spreaders of the disease.

Spread of the disease depends on the virus, but also on the population's living conditions and their understanding of the disease, which can feed the chain of transmission. The fatality rate is also dependent on the type of care that can be given to patients. Ebola merely takes advantage of weaknesses in the systems. It grows and spreads because of the economic disadvantages of the population, the fragility of the health systems and control actions that do not always take into account the cultural context.

The Ebola crisis is the reflection of the increasing inequalities in education and access to basic healthcare in West Africa. The virus is only exacerbating the vulnerability of the people: medical monitoring for chronic diseases has been halted, as have treatment for tropical diseases and maternity monitoring; children are no longer vaccinated and no longer go to school, etc.

The collapse of the health system and the suspension of education services represent a risk for both the endemic anchoring of the Ebola virus in the region and for the emergence and spread of new diseases. This is a strong signal to redefine how best to intervene to help these traumatized countries in controlling and preventing further disasters of this type.