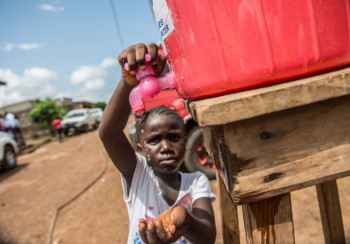 With a fatality rate of over 60%, the result of the current Ebola epidemic on the body is obvious. The psychological impact is less visible, but the virus is also breaking morale. It is generating fear and negatively impacting mental health. In so doing, it is breeding social collapse, undermining the fabric of communities and contributing to the rise of rejection, violence and conflict, which, in turn, facilitate its spread.

The exponential growth of the virus directly interferes with daily life and social habits. Regional tournaments, international conferences or Independence Day celebrations in Guinea have been canceled or postponed; the promotion of health can no longer be carried out at large gatherings; believers are reluctant to attend services, and Muslim pilgrims from affected countries have been denied visas to Saudi Arabia.

Contrary to traditional family solidarity, families are being urged not to treat their sick, rather to take them instead to overwhelmed health centres, where the risk of infection are increased and where the deceased will not receive a traditional funeral. The bodies become transmitting agents of the disease, and prevention methods are also contrary to local customs, which are based on sociability and human interaction. The others, especially health-care workers, have become potential threats.

The stigmatization and isolation of those affected, whether they be infected, suspected or healed, remain an important challenge. In the meantime, the survivors, despite prejudices, are immunized against the disease, and are an invaluable resource in the fight against Ebola for their blood, or their role as a caregiver. Rejection also affects close family members of a person and the staff responsible for fighting against the virus.

Faced with the risk of social rejection and the fear of becoming a pariah, they refuse to report cases, they hide, they run away or they refuse to be diagnosed. The people placed in official and drastic quarantine are put under house arrest, do not have access to food, can no longer move about for their business and find themselves far from their loved ones. In this context, children – orphans or unaccompanied – are particularly vulnerable.

The fear factor is having an even greater impact on the economy than the virus itself. The World Bank rates it as being responsible for 90% of the virus's economic impact, by transforming human behaviour and reducing human interaction.

The media are as much a part of the problem as of the solution. Often of poor quality and with a lack of critical thinking, some reporters participate in the rapid spread of rumours and contribute to the political and social destabilization. The context of the fight against the Ebola virus is thus made even more complex. The State is also having trouble—by omission, lack of transparency or because of the people's mistrust—in making the public understand the measures it has taken.

The legitimate fear caused by the Ebola virus is having a significant social impact. It is contributing to the escalation of violence in the affected countries. By giving rise to the weakening of communities and public institutions, it is contributing to the creation of a life-threatening environment that is not conducive to its own development. A human drama is being played out: avoiding the strangers most likely to take care of them—health centres, NGOs—and drawing closer to the inner protective circle—the most likely place to become infected; the care and comfort of friends and family become a threat of contamination... The traumas go beyond those affected by the Ebola virus. Social representations are shaken, solidarity is hurt, and confidence is undermined. There are also those invisible wounds of entire populations that must be taken care of now, and will continue to have to be treated in the future.