D&P partner named to Pontifical Council for Justice and Peace

In News from our partners
October 12, 2012
by
Kelly Di Domenico, Communications Officer 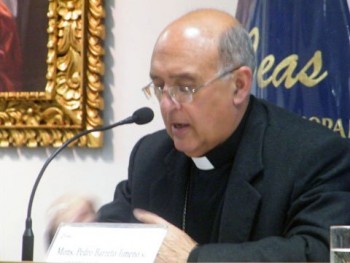 Archbishop Pedro Ricardo Barreto Jimeno, Archbishop of Huancayo in Peru, has been nominated by the Pope to the Pontifical Council of Justice and Peace at the Vatican. Archbishop Barreto is the President of the Department of Justice and Solidarity of the Latin American Bishops’ Conference (CELAM) and Vice-President of the Bishops' Social Action Commission (CEAS), an organization supported by Development and Peace.

The primary mandate of the Pontifical Council of Justice and Peace is “to promote justice and peace in the world, in the light of the Gospel and of the social teaching of the Church,” and was first established by Pope Paul VI in 1967.

Archbishop Barreto has been very active in social justice work in his diocese. In the face of serious pollution around a US-run foundry in La Oroya, in 2004, with the help of Saint-Louis University, a Jesuit school in Missouri, he transformed the archdiocesan kitchens into a laboratory to test soil and air samples for heavy metals. The Doe Run foundry processes minerals mined from the surrounding Andes into copper, lead, zinc and other metals. The amount of pollution caused by the smelter has led La Oroya to being named one of the 10 most-polluted places on the planet, with high levels of lead, arsenic and other heavy metals found in the soil, air and even in the blood samples of local residents.

The smelter was closed in 2009 due to environmental and health concerns. However, it has now resumed operations, after the company was forced to adopt environmental norms that were finally enforced by the government as a result of the work of the archdiocese. Archbishop Barreto recently travelled to the U.S. to give testimony to the human rights panel of the U.S. House Foreign Affairs Committee on the environmental damage caused by the smelter and the need for tighter regulation.

“Because of our faith in Jesus Christ, believers cannot be silent in the face of evil,” he told the panel.

In a statement released after the nomination, the Archdiocese of Huancayo said: “The appointment of Archbishop Pedro Barreto as a member of the Pontifical Council for Justice and Peace, is a recognition of the work of the Archdiocese of Huancayo through the priests, religious and laity, who day after day, shepherd the search for common good and a country that is just and united.

In a meeting with Development and Peace staff in Huancayo in October, 2012, the Archbishop said that he is humbled and yet challenged by his new appointment, and feels very honoured that the Pope has recognized his work for justice and peace in his community in Huancayo.

The Church in Madagascar and the DRC come together to address mining injustice.
Read more