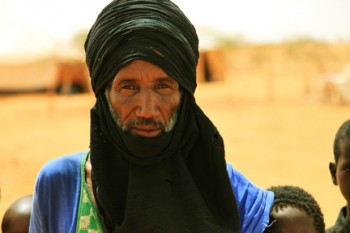 It was a tremendous experience to share this new documentary with those present. The panel discussions, which took place after each screening, were highly engaging, as audience members brought forward many thoughtful and inquisitive questions and comments. Their keen interest to learn more about the challenges and suffering of others, and to rouse change, was inspiring.

Oftentimes, the word "hope" was evoked in relation to the documentary. It shows a side of aid and of Africa that is rarely seen in the media, where instead of misery and despair, there is action, collaboration and joy in the process of working in partnership to make change happen. But equally hopeful were the exchanges that we witnessed taking place in the rooms where the screenings took place, as those present wanted to know more about the situation in the little known Sahel, and how local people envision their future.

The presence of Fr. Isidore Ouedraogo, Executive Secretary of Caritas Burkina Faso, on the panels brought enlightenment and an added dimension of solidarity in relating the firsthand experience of the communities he works with in his country. As he mentioned at one of the panels, "What each one of you does as an individual, is having an impact on individuals. I can you tell this."

In addition to Fr. Isidore, I want to thank all those who participated in the panels, including Kris Dmytrenko, director of A New Leaf, Jim Cornelius, Executive Director of The Canadian Foodgrains Bank, Most Rev. Albert LeGatt of the Archdiocese of St-Boniface, Most Rev. Michael Miller of the Archdiocese of Vancouver and Most Rev. Richard Gagnon of the Diocese of Victoria. The diverse voices on the panels demonstrated that we each have a stake and a role to play in bringing forward a just world.

I truly wish that we could have held screenings in as many cities as possible to celebrate the impact of our solidarity. However, considering the size and scope of our country, this would have been quite a feat! Thankfully, for those who could not be at a screening, there is still the opportunity to see A New Leaf, which will air this Sunday, March 10th at 9 p.m. (EST) on Salt and Light Television. For those, who do not subscribe to Salt and Light, you can watch the documentary simultaneously via the live feed on their website.

We hope that you will feel the same sentiment of hope and solidarity that we felt at each premiere from Ottawa to Victoria and continue to spread that hope to those we couldn’t reach!